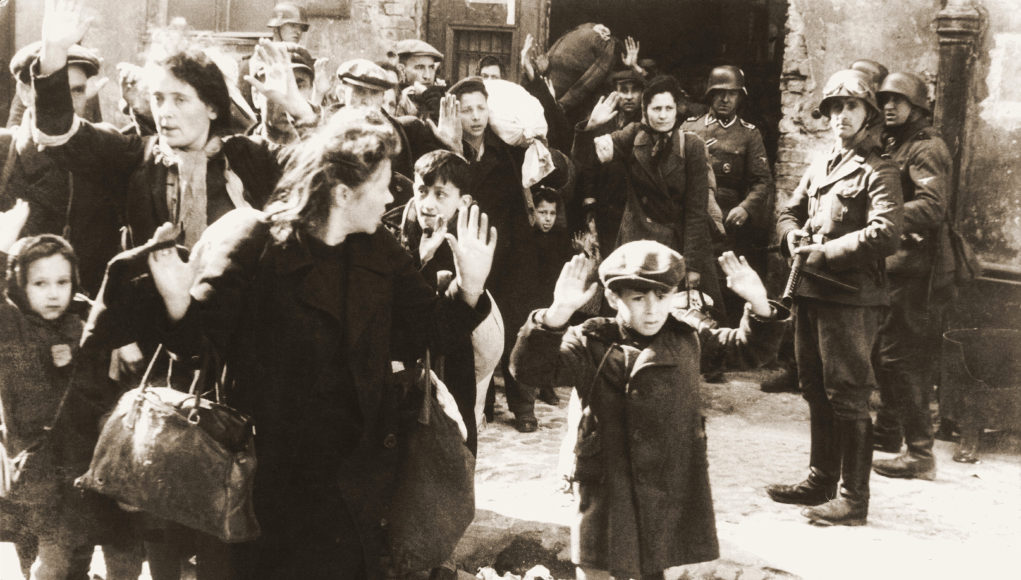 Truly few pictures can be viewed as iconic.  This picture is taken from the Stroop Report — a detailed memorandum detailing the suppression and liquidation of the Warsaw Ghetto in 1943.

Most Americans know this best from Steven Spielberg’s Schindler’s List, a movie that was so gripping, many individuals ran out of the theaters inconsolable when it came out — not because of empathy, but because it happened to them.

This is the endgame of nationalism, folks.
It does not change.
The math is not altered.

In any instance where nationalism rears its head, there are ethnic winners and ethnic losers.  Some folks stay, other folks leave.  The American values of assimilation and pluralism die back for separate and — so we pretend — equal.

During the great era of immigration where the American Industrial Revolution and the settlement of the American West saw vast numbers of Irish, German, Italian, Chinese and Slavic immigrants come to the United States, the worn our and tired “globalist vs. nationalist” dialectic — a false choice if there ever was one — was utterly ripped to shreds by none other than Teddy Roosevelt, who pledged himself to a third path — patriotism.

The American people are right in demanding that New Nationalism, without which we cannot hope to deal with new problems. The New Nationalism puts the national need before sectional or personal advantage. It is impatient of the utter confusion that results from local legislatures attempting to treat national issues as local issues. It is still more impatient of the impotence which springs from over division of governmental powers, the impotence which makes it possible for local selfishness or for legal cunning, hired by wealthy special interests, to bring national activities to a deadlock. This New Nationalism regards the executive power as the steward of the public welfare. It demands of the judiciary that it shall be interested primarily in human welfare rather than in property, just as it demands that the representative body shall represent all the people rather than any one class or section of the people.

We sure could use that sort of Republicanism today.

Yet time and time again, we see this republicanism break down.  In the 1920s during the heyday of the Weimar Republic in Germany, socialists and populists broke down into the hard left and the hard right — Communists and National Socialists respectively.  It was only when the Catholic Center Party reverted to fear and fulfilled a traditional Bismarck-era role of siding with (sic) conservatives against the left, rather than standing firm against the experiments of both extremes.

Holocaust Remembrance Day is remarkable for any given number of reasons, not least of which is the banality of human violence against others.  Such instances are replete in history: Greeks threw children off the city walls; Romans enslaved millions; the Huns killed, raped, and sold everyone in their path; the Chinese killed millions; the Mongols killed and enslaved millions; Islamic jihadists and European crusaders; the Wars of Religion and the Napoleonic Wars.  The Turks themselves crushed an Armenian fifth column for being insufficiently Turkish — and in a crest of nationalist fervor, sent millions of Armenian Christians on a death march into the Syrian desert.

The Jewish Holocaust brings other factors into play, not least of which that the Nazi German policy of extermination prior to the Wannsee Conference had consisted of young soldiers pressured to shoot the first untermenchen, which made it easier to shoot the next one, and then the next.  Hundreds of thousands of Jews, Poles, and Slavs were exterminated in this way with their bodies left roasting over massive pits in forests — then the Einsatzgruppen were plied with alcohol, alcohol, and more of the same.

The psychological toll became acute among the young soldiers, if Rudolf Hoess is to be believed.  The Nazis had to come up with something different to complete the task.

What made the Jewish Holocaust so terrible and unique in the annals of human suffering was that the extermination was an industrialized process.  By 1945, Auschwitz had literally run out of Jews to kill.  Only the expediency of the war effort against the Soviets kept the remaining Jews alive.

It was on January 27th, 1945 where the remaining survivors of Auschwitz were liberated by the Red Army — hence the reason why the Jewish Holocaust is remembered this day above all others.  Such encounters multiplied despite German attempts to evacuate, kill, and destroy evidence elsewhere — and the impact on Allied soldiers was singular and unprecedented, with lasting effects even today:

In the months that followed, troops from the USSR, Western Europe and the U.S. would liberate many more camps, as the Nazis scrambled to destroy the evidence of their crimes. Though the persecution of Jews and others was no secret, the liberation period was when many people were first forced to realize the extent of what the Nazi regime had been doing.

One such revelation took place three days prior to the Germans’ surrender, when U.S. Army soldiers stumbled upon the Gunskirchen Concentration Camp, a sub-camp of the death camp Mauthausen.

And the lives that changed that day have continued to intersect in surprising ways. At the time, Alan Moskin was an 18-year-old American soldier who helped liberate the camp and Nandor Katz was a 19-year-old prisoner. The two men, now 91 and 92, recently found out that they live less than an hour away from one other in New York state, thanks to a discovery by Halina Rosenkranz, the Westchester Jewish Community Services’s Holocaust survivors’ groups counselor.

After the war, voices on the right wondered aloud, “What went wrong with fascism?”  While other voices such as Derrida, Sartre, Camus and Levinas sought out the precepts of personalism, others such as Evola, de Benoist, and Schmitt attempted to reforge and reform the virtues of nationalist fervor with a more traditionalist flair — a Christendom without the Christ, as it were.

Yet this was all by design.  The reason why we remember the Jewish Holocaust is precisely because the Nazis wanted to make such a remembrance incredible to Western ears.  10 million dead?  Who would do such a thing?  Surely the fascists would get another bite at the apple, because the West would never have the chance to evaluate holistically what the consequences of nationalism really are.  Daniel Krauthammer writes for The Weekly Standard:

The Nazis’ purpose at Auschwitz—as in the whole of the Final Solution—was not just to destroy an entire people, but to erase them from memory. There were to be no victory columns, no fanfare, no parades to celebrate the vanquishing of the hated Jewish race. History was not to record that they were conquered or enslaved or murdered. The Jews were simply to disappear. Perhaps the only thing more shocking than the scale of the Holocaust is how minimal are the remaining markers. It makes remembrance all the more difficult, and all the more vital.

The picture above?  In the Stroop Report, it was entitled “Forcibly pulled out of bunkers.”

Today, we see a resurgence of the very same nationalism.  True, it cloaks itself as “populism” but the sentiments are still present.  There is an us, there is an other.  The European Union’s borderless migratory zones within the EU itself were already problematic as Germans saw countless Turks migrate for better jobs and better fortunes.  So too did England see Poles come to the UK, France saw countless Algerians and former pied noir emigrate after the Algerian War for Independence.

Some may intellectualize the argument.  The memes used to propagate the sentiment betray its true purpose.  After all, it is not a cogent discussion of borders and communities of interest that predominates Facebook and Twitter, but rather roving packs of Muslims raping beautiful Scandinavian women.  Even a comparison of European migration does not seem to make proponents flinch, as Poles who suffered under communism come to England for better jobs and better pay — forgetting momentarily that the British already have an Ireland to kick around for surplus labor.

…and then we have the Alt-Right and their useful idiots within the Alt-Lite who perpetrate the argument, with their Pepe the Frog memes and references to Jews.

The Nazis forecast all of this, remember.  They were counting, not on leftist borderless sentiment that promoted lax immigration policies, but the very fact that future generations who did not see the Jewish Holocaust for what it was would forget.

In 1945, when General George S. Patton liberated Buchenwald, the nearby German citizens — 12,000 women mostly — were marched into the concentration camp to see its horrors.  Nearly all professed ignorance at what was happening there:

This is the endgame of populist politics and nationalism leading to fascism, just as sure as progressive politics and socialism leads to communism.

There is but one antidote to this: patriotism.  Not the siren songs of nationalism or the surrender into a global community, but the old virtues our grandparents fought for in the Second World War: democracy, pluralism, and toleration.

All of these values are the inheritance of the Christian West — alien among the secular religions of the left and right, but necessary in order to create the American republic.  It is the foundation of our Declaration, the animus behind our Constitution, and the soul of American entrepreneurial strength.

Patriotism does not tolerate nationalism nor globalism. American patriotism fights socialist and fascist alike.  This patriotism eschews the experiments of progressives and populists, focusing almost solely on the question of how we — as a society — can best afford each and every individual the maximum opportunity to become who they are.

…and we are losing that sentiment daily, if for no other reason than the old American catechism simply isn’t being taught anymore.