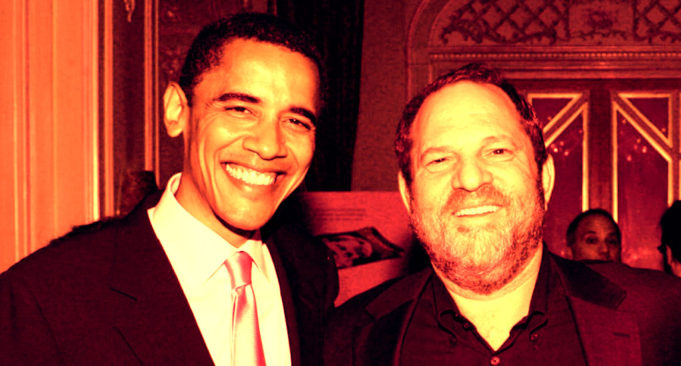 TMZ isn’t exactly top-of-the-list reading.  That is, until they come out with his Weinstein Company contract that explicitly states that his contract allowed — yes, allowed — for sexual harassment.

Which means that if you’re not angry — viscerally angry — at this culture of contempt for women within Democratic fundraising circles, and if you are not willing to shun those who knew about the problem yet continued to accept cash from one of the most despicable human beings in Hollywood since Roman Polanksi… then something is deeply and seriously wrong about your priorities as a human being with a soul.

The whole saga over Harvey Weinstein is atrocious from start to finish — a predatory scandal that brings into stark reality “casting couch” culture along with the complicit acceptance of a massive swath of the Hollywood left — both political and entertainment.

There is literally nothing salvageable here.  Everyone knew about it; no one wanted to talk about it.

Politicians themselves worked hand in glove with Weinstein, knowing full well that rumors (and victims) existed while happily accepting campaign contributions from Weinstein and his associates — and Barack Obama was no exception to the Weinstein rule:

The producer — using his connections to the wealthy Hollywood and New York elite — gave or helped raise more than $100,000 for Barack Obama and the Clintons since at least 1995, according to OpenSecrets.org. Roughly half of that went to Hillary Clinton’s presidential and Senate campaigns, including a political committee she used to support other Democrats and a joint fund with the DNC in 2016.

In total, Weinstein gave or helped raise — or “bundle” — $1.5 million for Democratic candidates over that time, according to OpenSecrets, the nonprofit Center for Responsive Politics’ website that tracks campaign finance.

Virginia Governor Terry McAuliffe was knee deep in the scandal as well, accepting over $57,000 in campaign contributions from Weinstein before being forced to donate it to charity earlier this week.

Lest anyone doubt for a moment that Weinstein’s reputation has not preceded him, this is but one example of many via BBC:

I told friends about it but no-one really said much. People giggled or looked embarrassed, and some said, “well, that’s just something that happens”.

The question here is what is going on in Democratic fundraising circles that believes this sort of activity is permissible — much less tolerable.  Why, after decades of this abuse and scandal, did Democrats continue to sweep it under the rug?

…and why are those who are enabled this reprehensible behavior (to include rape and sexual assault) being extended a free pass?  To the point where they are coming into Virginia to campaign on behalf of Ralph Northam?

Neither one of them have the moral authority to come speak to Virginia about anything remotely resembling values.  Anyone who took any cash from this scumbag has explaining — not campaigning — to do.

This is the true face of the Democratic Party.  So long as they are willing to trade values for power — tolerating rapists and sexual assault in their own fundraising circles — then they should never be trusted with anything remotely resembling public office.

The silence from the left isn’t deafening, it’s deplorably common.