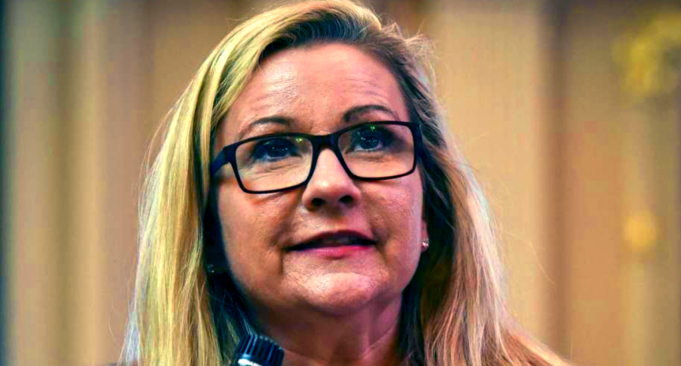 Ignorance is no virtue.  So when it comes to laying down certain unalienable truths, one might hope that self-declared patriots would get basic facts right.

Republicans have been fighting against the caricature the liberal media of gun-toting and Bible-beating renegades for some time now.  Of course, when the liberal media finds just the sort of person to fit the bill, they just can’t help themselves — even if that person isn’t a Republican at all.

Chase ostensibly is running for the Republican nod for governor in a convention after threatening to walk away and run in an “independent primary” (which, as an independent, one would simply run).

Of course, after having been thrown out of the Chesterfield GOP and unceremoniously booted from the Virginia Senate Republican caucus, Chase seems to be embracing her Dixiecrat roots — caricature and all.  To wit?  Here’s Chase’s basic failure to understand American history in a recently reposted video from a speech she gave in February 2020:

“In 1787, the Declaration of Independence was formed to be independent from tyranny. The same year, the Constitution was written in the states.”

Color us confused, but the Declaration of Independence was written in 1776 some 11 years prior to the Constitutional Convention of 1787, and was ratified in 1788.  Such a quote also omits this tiny yet significant even we call the American War for Independence which bought that freedom in the blood of patriots.

If the gross inaccuracy of the above quote makes you cringe, you are likely not alone in that feeling.

For a candidate that so liberally quotes the headline of the U.S. Constitution “We the People,” Senator Chase appears to have a scarily insecure grip on the history that shaped our nation’s founding.  That’s not fighting, that’s fumbling.

Now one might charitably be led to think that this is a mishap.  Yet for a candidate hyped by the liberal media as a caricature of what Republicans actually believe?  Well… Chase continued to beclown herself:

“Americans, Virginians, ‘We the People’ will not be directed by a leadership that does not hold to the oath of office, which states, and I quote, ‘preserving the Constitution of the United States.’

I promised you, when I took my oath of office, that I would preserve and uphold the Constitution.”

Given her basic failure to understand our origins, one has to wonder what sort of idea of the US Constitution she intends to uphold?

Further, conflating the Declaration of Independence with the Constitution — two radically different documents — makes it difficult for one to trust that she will indeed stay true to her promise to “preserve and uphold the Constitution,” which she (actually correctly) states is a necessary condition to remain in office.

What makes this more ironic isn’t just the fact that Chase made Soviet-style arguments to impose martial law and militarize our government. Ironically, martial law would actually suspend the Constitution, imposing complete military control over our country.  For someone who often expresses her distaste for tyranny, Amanda Chase seems to be quite alright with enacting tyranny in the form of martial law.

More alarmingly, this total misconstruction of the American experience is precisely the sort of caricature the Democratic Party wants to run against — hence the reason why self-styled “Dixiecrats” like Amanda Chase are trying to hijack the Republican nomination for governor.

One might look to alternatives.  At present, former Speaker Kirk Cox (R-Colonial Heights) is the only Republican to have announced as a contender for the Republican nod.  That Cox spent 30 years teaching government in public schools only adds to the irony.

Yet there’s another item we should address here.  Chase is known for being a “fighter” of a sort — but fighting for what?  Can we name the legislation she has passed?  Beyond her love for “white history” and the Confederate flag (and her Alabama heritage), what precisely passes Chase off as a conservative in the eyes of the media other than to make the Republican Party look like lunatics?

Chase claims to fight.  But for what end?

Of course, it’s no secret that the liberal media loves her, if for no other reason than (a) she’s the walking caricature of a racist, gun-toting, anti-law enforcement weirdo, and (b) the birds of a feather seem to be awfully fond of things like strangling people over the Christmas holiday.

No joke.  A member of Chase’s “security detail” actually did this.

Some of us grew up in trailers as children.  Most of us chose not to live down to the caricature of trailer trash.  Rural and working class Virginians ought to deeply resent being told that what Amanda Chase represents is indicative of our values — by the liberal media or by bottomfeeder campaign consultants.

The bottom line here is that Virginia is America, and not to possess a basic 4th-grade understanding of how Virginia created America is worse than ignorance; it is malpractice.

In a state so rich in history, in an office held by some of the most esteemed individuals (none recently), one would hope that Republicans will nominate a candidate equipped with the bevy of knowledge necessary to lead the renowned Virginia and not the caricature of ignorance Chase represents.