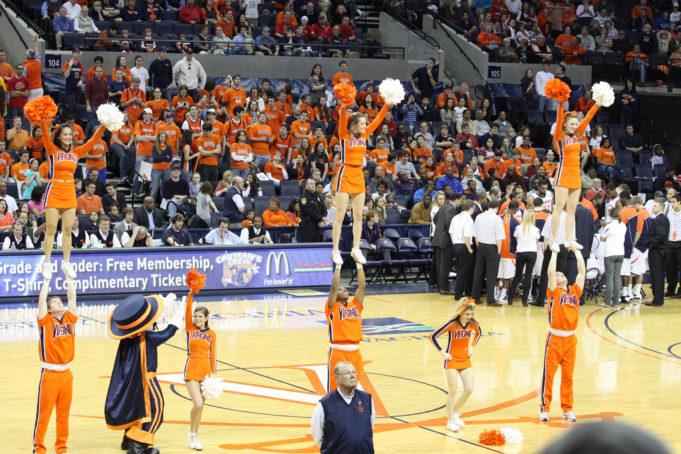 The University of Virginia (UVA) basketball team has climbed to number one in the AP Top 25 rankings for the first time in more than 35 years. Though, it came after a wild overtime loss to Virginia Tech who came into Charlottesville as double digit underdogs. UVA came into the game with the chance to go 13-0 for the first time ever in conference play.

The Virginia Tech Hokies reeled of 17 straight points in the first half, causing Tony Bennett’s Cavaliers to trail early in the game. This was a shock to the Charlottesville crowd as the team as enjoyed home court advantage all season.

Late in the game, the Cavaliers were down two points with just over 10 seconds left in regulation play as six-foot five-inch sophomore guard Ty Jerome landed a shot from around 15 feet out to tie the game at 49 even. After Virginia’s Jerome missed a buzzer-beater from beyond the three-point line, the game was sent into overtime.

With the Cavaliers up with over one minute to go, Virginia Tech’s Kerry Blackshear Jr. grabbed an offensive rebound with under six seconds left in overtime, made the shot, and was fouled – giving the Hokies a 61-60 lead as time ran out. Tech improves to 18-7 overall and 7-5 in the Atlantic Coastal Conference (ACC). Virginia, now 23-2 and 12-1 in conference play, faces number 25 Miami on Tuesday.

Many claim Michigan State’s Spartans should have taken over the top spot on the power rankings after their victory over top-performer Perdue, according to a report from ESPN. However, even though Villanova and Virginia, two top-three teams, lost this weekend, the elite competition Virginia faces is the reason it now enjoys number one.

They may have left the court on Saturday with their heads down, but Monday’s rankings release has everyone at UVA cheering. Bennett’s Cavaliers earned 30 of the 65 first-place votes during Monday’s poll, out maneuvering Michigan State, climbing to first place in the AP poll since December 1982.