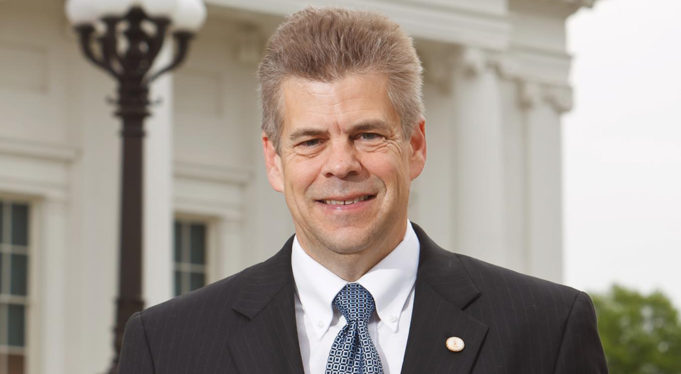 As the slate of statewide candidates for Virginia’s 2021 elections continues to grow, gubernatorial candidate Kirk Cox (R-Colonial Heights) continues to tout an ever-expanding list of endorsements.

“Uniting the party” has been a primary staple of Cox’s campaign from the onset, and it appears he is attempting to do exactly that.

Just months after entering the race, the Kirk Cox for Governor campaign has already rolled out over three dozen endorsements from the Henrico area, 23 from Chesapeake, and a whopping 58 endorsements from Chesterfield — among numerous others — totaling over 100 leaders across the Commonwealth all betting on him to deliver victory.

The 58 endorsements from Chesterfield are notable because they also represent the beating heart of State Senator Amanda Chase‘s (I-Chesterfield) nascent and floundering run to fill in the shoes of disgraced Governor Ralph Northam, who has been hobbled by his own views on race and bigotry.

However, in stark juxtaposition to Cox, Chase has yet to secure any endorsements at all for her gubernatorial bid, despite having entered the contest nearly a year ago.

Of the 100+ list of Kirk Cox endorsers, here are the most notable of the bunch:

Over 30 years of legislative experience in the Virginia House of Delegates has its advantages, to be sure.

Not only has Cox earned the trust of his colleagues and peers, ranging from community activists to current and former elected officials, Cox’s brand of pragmatic statesmanship continues to develop inroads throughout the Commonwealth during his time in office — and it is paying early dividends against Chase.

Thus far, if the contest is between the past and the future, Cox seems to have a ready hand on the future of the Republican Party.  Meanwhile, Chase for all her Dixiecrat branding cannot even earn the support or endorsements of her constituents and citizen leaders back home.

Cox is setting an early tone emphasizing solutions over rage and pragmatic deliberation over provocative outburst.   Cox’s endorsements and his steady brand of leadership is living up to the promise of uniting the Republican coalition in the face of Democratic intransigence — and appears to be just warming up the engines.

Now, 11 years removed from a statewide Republican victory in Virginia, it will take someone special to overcome the odds and flip the Commonwealth red. From the looks of it, Kirk Cox is living up to the “Uniter” brand necessary to restore Virginia to its former state of steady, conservative leadership. At this rate, Cox’s list of endorsements appears to have only begun — and one can expect even bigger names and more prominent leaders to back this horse for 2021.