The Virginia Parole Board has been consumed in controversy since last summer, when they hastily released Vincent Martin, who murdered a cop execution style, amid an ongoing investigation into the matter.

Even worse, the Board failed to notify the victim’s family beforehand. Not surprisingly, this corrupted Parole Board was appointed by none other than Terry McAuliffe and Ralph Northam — and Vincent Martin is only one of many times the Board has been found to have broken the law.

While the two Democrat Governors responsible hide themselves from the controversy, Kirk Cox (R-Colonial Heights), candidate for Governor, is demanding accountability — calling for Northam to fire the entire Board.

Cox isn’t new to the issue either. He first raised concerns, alongside other Republicans, last year when an Office of the Inspector General (OSIG) report, despite being almost entirely redacted, indicated the Board had broken the law in releasing Vincent Martin.

But the Martin case was not an isolated incident for McAuliffe and Northam’s appointees. The Virginia Mercury obtained full copies of OSIG reports that “show a pattern of violations that ran in favor of releasing inmates quickly and against consulting others who might have a dissenting opinion.”

It was when this information surfaced that Kirk Cox drew the line, demanding the Governor fire his entire Board. Notably, Cox is the only Republican candidate, to date, that has taken a firm stance against the Parole Board’s disregard for the law. The former Speaker, Kirk Cox, released the following statement today:

“It is clear that members of Virginia’s Parole Board failed to follow through on their responsibilities to the Commonwealth. Yet, Ralph Northam has failed to take action, eroding trust and confidence in what should be an impartial administrative board,” Kirk said. “When I’m Governor, I’ll clean house: Fire the entire Parole Board and restore integrity and accountability. Because we need a Governor who protects the Commonwealth, not the criminals.”

In tandem with Cox’s statement, he additionally put out a new ad, echoing the sentiment from his previously-noted remarks, and demanding action from Governor Northam. 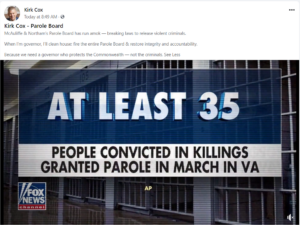 The Governor is currently trying to play dumb, denying he had knowledge of the extent of the Board’s transgressions. Even more complacent is Terry McAuliffe, who instead of playing dumb is simply playing the quite game — refusing to comment on the matter he helped create.

Northam is welcoming an outside investigation into the recent, scathing reports on the Parole Board’s actions, but more needs to be done. Based on the evidence prior to the latest reports, appointees needed to be dismissed.

But especially in light of what we now know, the only reasonable course of action is to heed Kirk Cox’s call — and fire the entire Board, else wait until a Republican Governor has to do it themselves.