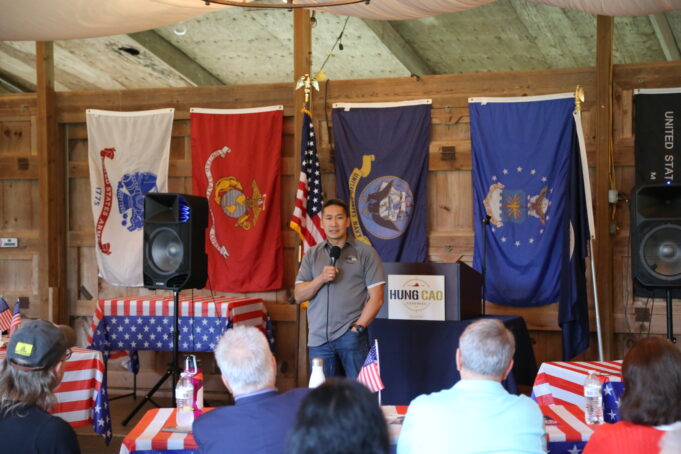 Northern Virginia has steadily drifted away from the Republican column in recent elections, a phenomenon that greatly accelerated between 2016-2020. However, Republican Glenn Youngkin won the popular vote here during his successful off-year gubernatorial election.

Now, Republicans have a charismatic candidate in Hung Cao – a retired Navy Capital with 25 years of experience in special operations.

Defending America is the greatest honor of my life. But we don’t do it for Republicans or Democrats, we fight for all Americans, and that’s what I’ll do in Congress.

I'm Hung Cao, and I'm your next Representative. #VA10 pic.twitter.com/Ew6OgwTSBA

The 10th district has a Partisan Voter Index (PVI) of D+6, per the Cook Political Report. Cao’s team must be hoping that lightning will strike twice here in as many years with the help of near-daily rallies headlined by Gov. Youngkin. If Cao wins, political analysts argue that the red wave will be big enough to inundate deep blue states.

The Cook Political Report’s Dave Wasserman tweeted on Friday that he is looking at Virginia’s three most competitive Congressional races – VA-02, VA-07, and VA-10 – as national bellwethers.

This is in part due to their competitive nature, but also due to the fact that the polls in Virginia will be some of the first to close nationwide. Therefore, it is anticipated that the results of these races will be known before polls even close in several other areas of the country. Wasserman is also predicting that a loss for Wexton would signify that Republicans would pick up 30 or more House seats across the nation.