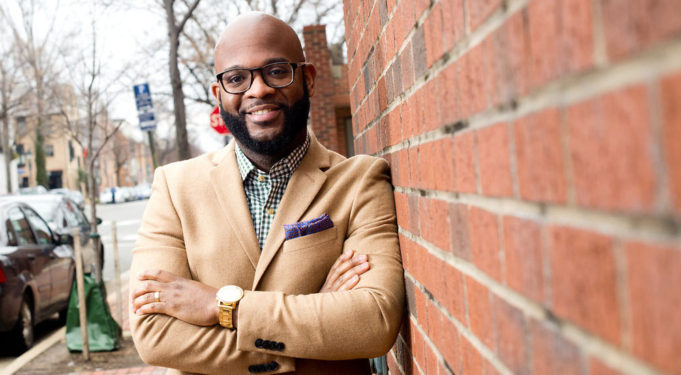 Laquan grew up in a rough community. In fact, the first few years of his life were spent homeless. His mother was 1 of 9 children and while many of her siblings suffered from the vices of urban poverty, she worked hard, sacrificed, and made a good life for herself. She put her energy and faith into raising Laquan and his siblings, making sure they grew up understanding the importance of resilience.

Laquan Austion is a man who deserves our respect.

Rarely do you hear stories of individuals who through sheer will pull themselves up from the trap of poverty.

HOD-02 Republican candidate Laquan Austion did precisely that, and while no man is an island, the demographics hand fate dealt would have made it all too easy for Laquan to become what the statistics and the numbers said he should have become: a nobody.

Let’s repeat that: If you are doing your masters, you are working on your PhD.

That’s not what Austion did.

For that cardinal sin, for the unforgivable act of pursuing an education and defying the odds, some shitbird dropped an hit piece on Laquan Austion to the Richmond Times-Dispatch… and for some reason, Patrick Wilson decided to run with it.

Here’s the story: Laquan graduated from Drew University in New Jersey and pursued his Masters/PhD at George Washington University, the two programs being linked (as most are).  In February, the campaign passed along information stating very simply “George Washington, MA” — reflected on his LinkedIn account as well.

So is Laquan currently pursuing a PhD, you ask?  Of course he is.

Here’s how it works for those not familiar with academia.  Most masters programs force you to take your masters coursework alongside your PhD program.  It only makes sense, even though there was a time where that was frowned upon, it is now part and parlance; if you are doing your masters, you are working on your PhD.

Let’s repeat that: If you are doing your masters, you are working on your PhD.

Laquan took a leave of absence.  That’s fine and relatively commonplace.  Laquan is still working on his PhD.

Perhaps these shitbirds (because that’s what Democratic oppo guys are — shitbirds) decided that maybe they could get some useful idiot to repeat the charge and get it published in a newspaper of record on a slow news day.  Effectively, the entire argument hangs on one iota, one thread: Laquan failed to update his LinkedIn account when he took his leave of absence.

There’s a reason why the established media outlets are drowning in their own filth.  It’s because they do stuff like this to otherwise tremendous human beings with amazing life stories.  Stories where a black man born to total poverty pulls himself up by his own bootstraps, defies the odds, gets an education, and pursues it to a final path where the tiniest fraction of human beings get to that level of recognition by academia.

…what a way to shit on that narrative, RTD.

Of course, any Democratic operative worth their salt would love to destroy that narrative — and do it early.  That’s precisely what they are trying to do here.

It’s not going to work.  For a man who spent his childhood staring down odds, these shitbirds have made a calculated error: this, quite honestly, reveals the embedded racism still haunting Virginia’s Democrats in the post-Byrd Machine era:

What mystifies me — and what should anger Republicans — is why the mainstream media felt the absolute need to play useful idiot to the old racist narrative?  Or why a failure to update a LinkedIn account had to be the bell to ring.  What’s next — MySpace accounts?

There’s a reason why Democrats hold men such as Laquan Austion in such total contempt.  They beat the odds and break the shibboleths of their own narrow, pigeon-holed narrative.  If you want to learn more about Laquan Austion, click here and get to know the man for who he says he is.  If you want to fight back against stupid, there’s a means to do that as well.

Republicans should be thankful that good people set down their futures to run for public office.  Laquan Austion did precisely that, and the reporters (and editors) at the Richmond Times-Dispatch need to seriously reconsider their ethics policies with regards to operative-driven hit pieces.

If there is a reason why good people stay out of politics and work on their master’s dissertations rather than dive into the public square, this is it.  Democrats ought to be called to task on this: Who filed this story?  Where did it originate?  Why is was it twisted? What relationships were leveraged to get this into print?

Questions we won’t get answers to, I’m sure.  But smarter folks see right through the nonsense.