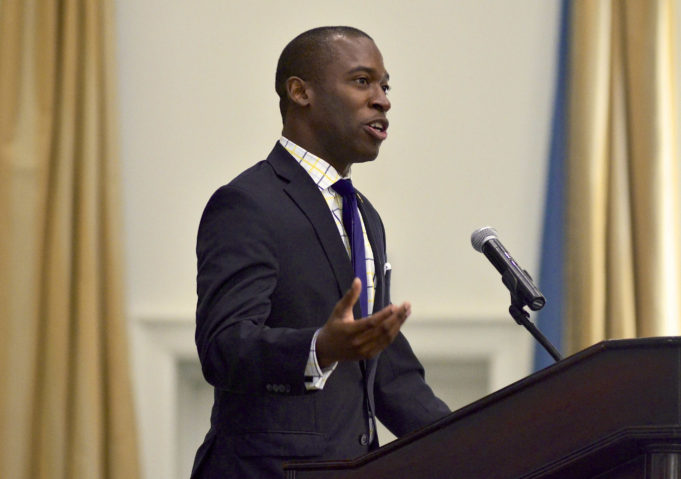 After funding nearly everything in the City of Richmond from the annual $750,000 payment to keep the Redskins training camp to the $54,000 per year given to Parks and Recreation for dance classes for city residents, Mayor Levar Stoney is now turning to the state legislature to fund Richmond Public Schools (RPS). At a short news conference on Monday outside the General Assembly, the Mayor was joined with Richmond-area lawmakers and RPS Superintendent Jason Karmas to endorse the House of Delegates version of the state budget which is set to give more money to a city budget that prioritizes frills over necessities.

Compared with the Senate version of the state budget, RPS would be dealt $2.4 million more in funding to go towards the operating budget. “Simply put, the House budget is a better deal for Richmond and Richmond Public Schools,” Stoney said, according to a report from the Richmond Times-Dispatch.

This occurs just weeks after Richmond restaurateurs and city residents alike were shocked as a controversial 11th hour $10 million meals tax expansion from the Mayor passed the City Council. The efforts were to fulfill the November referendum that would modernize RPS facilities without raising taxes. Apparently, even without raising city taxes to improve RPS buildings, Stoney cannot find the funds to operate the schools in a normal capacity.

In November, Mayor Stoney sent a letter to then-governor Terry McAuliffe asking for more funding for RPS in his last proposed budget before he was replaced with the newly-elected Ralph Northam. The former governor’s budget included a proposal of $5,589 in state funding per student for next year and $5,638 in fiscal year (FY) 2020.

During the Monday news conference, Stoney charged Senator Glen Sturtevant (R-Richmond) to support the lower chamber’s budget. He asked the former Richmond School Board member to support the budgetary provisions that are, “crucial to Richmond Public Schools.” In the letter, Stoney said, “I am doing everything I can to make sure we are meeting the needs of our city, but also our schools.”

“Nevertheless, Richmond, like other localities with severe challenges, cannot do this work alone while also maintaining a well-functioning government that meets the needs of all citizens,” Stoney’s letter stated. “We need the support and assistance of the commonwealth to meet our challenges successfully,” he added.

There has been contention between Stoney and Sturtevant as the Mayor balked on the tax-free referendum to modernize RPS. To combat this, the Senator introduced legislation that would require Stoney to craft a budget without tax hikes.

While Sturtevant voted for his chamber’s version of the budget, he claims more funding is needed for schools. In a statement, he said, “We all agree that we need to do more for public schools and that Richmond students deserve better.”

“I came from the School Board, so I understand those needs firsthand…I will continue to advocate for investments in public education with the Senate conferees ahead of the upcoming conference report of the state budget,” Sturtevant added.

Mayor Stoney is scheduled to present the city’s FY 2019 budget on Tuesday. Currently, it is uncertain whether Stoney’s budget includes assumptions of additional funding for schools from the House version.

“We have to be practical, obviously, when it comes to dollars and cents,” he explained. “We’re hopeful that the House budget passes, but we’re going to be as pragmatic as possible to ensure that our kids get every dollar they deserve,” he said.

In the last 10 years, the nationwide economic recession has led the City of Richmond to fund a bigger part of RPS as the state budget has decreased its funding. According to Richmond-based economic policy research firm, The Commonwealth Institute for Fiscal Analysis, during the 2008-09 school year, the state funded 45 percent of RPS. However, in 2015-16, that number decreased to 39 percent.

In light of this, Stoney said on Monday, “The truth is, the city has stepped up time and time again in recent years.” However, it is unclear if the city’s leadership will step up to provide funding for RPS over tourism and entertainment venues in Richmond.