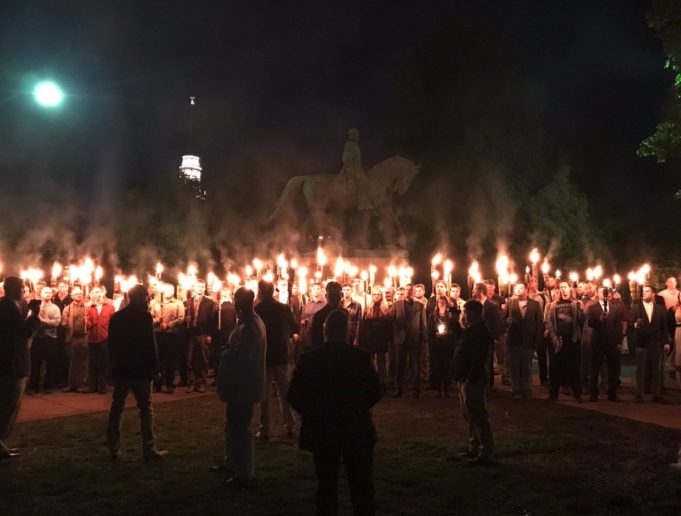 Breaking news from the Charlottesville Daily Progress where the University of Virginia is admitting knowledge of the Alt-Right “tiki torch parade” down the Lawn last Friday evening:

Remarks from Sullivan’s statement mirror a narrative first reported in The Chronicle of Higher Education on Sunday, which detailed that she and other university officials had been made aware of the group’s plans to hold some sort of rally at UVa the day before Unite the Right.

The event on Saturday lead to violent clashes before the official rally started, and the death of Heather D. Heyer later that afternoon, when a car plowed into a group of people.

Sullivan said in her statement that UVa is a public university, and that gives the general public the right to use outdoor spaces, such as Nameless Field where the march began.

Permits are not required to reserve public spaces, and the university generally doesn’t prohibit open flames in outdoor spaces.

Apparently what UVA — and ostensibly, UVA Police — misjudged was the size of the Alt-Right demonstration.

More importantly, they were aware of what was about to happen, which only raises more questions as to who told police to “stand down” and not separate the Alt-Right and Antifa protesters in order to avoid escalation.