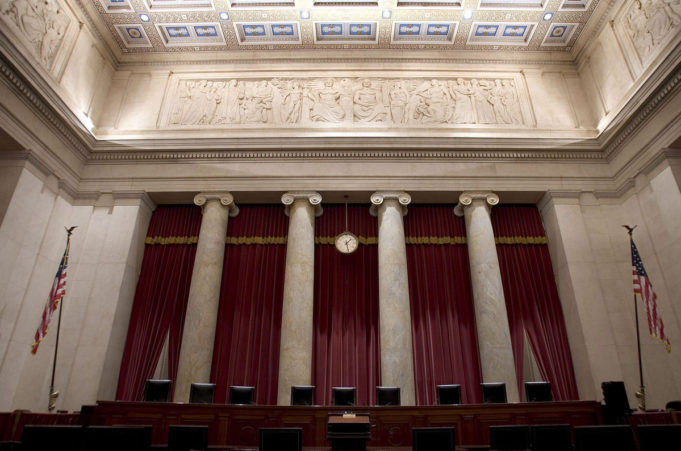 The public scouring of the public square from any and all religious sentiment has been in vogue for the last 50 years or more.  Such efforts were previously seen as a balancing between secular sentiments and sacred persuasions — conscience vs. coercion.

Yet the most recent move by the Nelson County Board of Supervisors seems much more on the side of coercion than conscience, or at the very least, it is terrible history.  From Emily Brown, and as reported in the News & Advance:

The decision to cover the words “Virtus — Keep God’s Commandments — Veritas,” painted onto the horizontal structure above columns that support the balcony located directly across from seats for the judge and jury, with a removable cover came on a 4-1 vote of the supervisors during their monthly meeting Tuesday.

“I am not willing to potentially spend hundreds of thousands of dollars of this county’s money, of the money of the citizens, on litigation,” Harvey said.

Though he voted in favor of the motion, Bruguiere was reluctant, saying during discussion he understands “it’s the judge’s prerogative” to cover or keep uncovered the lettering while court is in session, but he personally would prefer it remain uncovered.

There are a number of things to consider here, first and foremost that the conscience of individuals is being coerced to physically alter or cover this long-standing history of America’s small towns and federal-era sentiments through legal means — precisely the opposite power relationship that secular proponents 50 years ago argued against those who propelled the sentiments of the sacred.

What is more, let us not pretend that this temporary solution is anything but a permanent one.  Once the decision is made to accommodate the coercion of secular faiths, the new standard has been established.  Going back to a sentiment of pluralism is difficult to regain in the face of secular or sacred religions, each with their own packs of fractional fanatics ready and willing to impose their worldviews on the rest of humanity.

America was founded by profoundly religious individuals, and yet they gave us a republic — not a theocracy.  Yet that republic was born in the soup of Protestant religious sentiment, one that admonished the individual towards self-government as the only administration of a free people.  That self-government involved a maintenance of morals, both public and private.

On this, perhaps the secular and the sacred meet.  Morals and ethics ought to be a standard of both private and public morality free from government coercion.  The concept of using laws to effect a moral citizenry is something held in contempt by most Americans.  Rather, laws are designed to punish evildoers and protect law-abiders, not a process for forming habit and producing good citizens (as we find in say, the French model of republicanism).

One final observation remains.  The tradition of pluralism gifted to us by our forefathers is something to be preserved, not torn down in an effort to prove ourselves more enlightened.  If indeed we cannot reconcile the religious pluralism of the past with a modern appreciation of how we arrived at our own social and ethical values, then perhaps we do not have the moral standing or privilege of erasing or covering up the sentiments of tradition, much less vetoing the democracy of the dead.

Nelson County may be presented with a difficult choice in the face of a sitting judge who is demanding the alteration.  Yet historical whitewashing — even if fobbed off as temporary — is no grand solution to the problem of different people with different values living together in a civil society.  Rather, it is an imposition of secular values in the face of older, more traditional sacred ones — a strike against American traditions of pluralism in favor of secularism.

Worse and perhaps more alarmingly, it is a slide towards the antithesis of the American experiment: laicization.  Not merely content to allow differing opinions to reconcile, laicization takes the additional step of whitewashing the public square of all religious sentiment whatsoever.

The offending passage is quite simple: Virtus : Keep God’s Commandments: Veritas.  More accurately, it is Virtue and Truth, with “Keep God’s Commandments” as the link between the two, a very enlightened sentiment during the Federal Era of the American republic, but seemingly offensive to postmodern ears.

In the United States Supreme Court, an abbreviation of the Ten Commandments exists within the well of the court, the Roman numerals of each being listed and a tribute to both Moses and the Western canon.  The existence of this reminder of the Supreme Lawgiver has long been used as a defense of religious sentiment in the public square.

Religious pluralism is experiencing some strain in our postmodern culture, one that treats every disagreement as hate speech and views public morality as the prerogative of a purely laicized sentiment cool to secular sentiment and hostile to pluralistic values.

Nelson County has options.  Let’s hope they exercise the right ones.