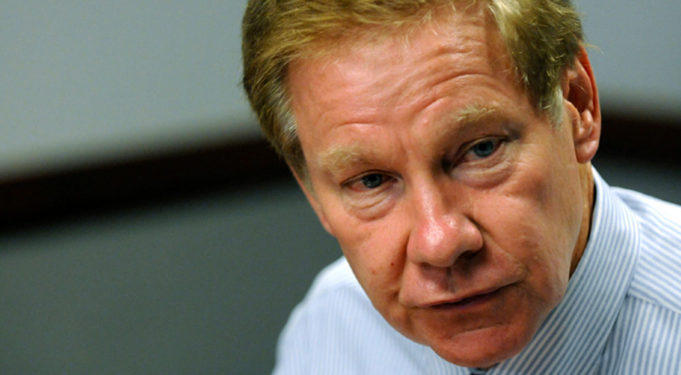 Former Congressman Tom Davis took to the pages of the Washington Post to defend the legacy of Confederate General J.E.B. Stuart — not just as a cost saving measure, but in support of the cavalry general’s legacy:

Then there is the matter of J.E.B. Stuart himself. There is no historical research and no posthumous war crime declaration that would lead anyone to find a compelling reason to change the name of the school. James Ewell Brown Stuart was a Virginian and a graduate of the U.S. Military Academy who became a highly regarded cavalry officer and tactician. Before the Civil War, he was part of an Army effort to stop the fighting in “Bleeding Kansas” and defended abolitionist settlers warring with their pro-slavery opponents. His role was celebrated in the movie “Santa Fe Trail,” in which he was portrayed by Errol Flynn.

Stuart inherited two slaves but freed them in 1859. He opposed secession, but he sided with his native state when war broke out, as did many other Virginia officers. He was 31 and a Confederate general when he died from wounds suffered in battle. His military prowess still is widely acclaimed. A saber hook he devloped (U.S. patent No. 25,684 A) was used by armies across the globe. And so renowned was his military genius, even internationally, that British M3 and M5 tanks used in World War II were nicknamed “Stuart tanks” in his honor.

Stuart is part of our complicated past. His role is something that can be discussed rationally and understood in the context of real history, not presumptions projected on him by people living 150 years later.

Davis’ op-ed so notable in the context of U.S. Senate candidacies, if for no other reason than Corey Stewart was supportive of the renaming of Mills Godwin Middle School in Prince William.  Godwin was one of the key leaders of Massive Resistance during the 1950s and 1960s who made the transition from Democratic to Republican leadership during the course of the 1970s after losing to Republican Governor Woody Holton.

Still, the space for the Republican nod for 2018’s U.S. Senate Republican nomination is starting to fill out just a tad bit, with stronger candidates emerging as the weeks move forward.

Many are speculating that a Davis-Gilmore contest would be an reprise of their near contest in 2008, averted only when Republicans selected a convention over a primary and Davis withdrew his interest.  The addition of Stewart, Fiorina, Frietas and Brat would certainly bring a crowded contest that would benefit those who could bring a white-hot core of supporters to the contest early.