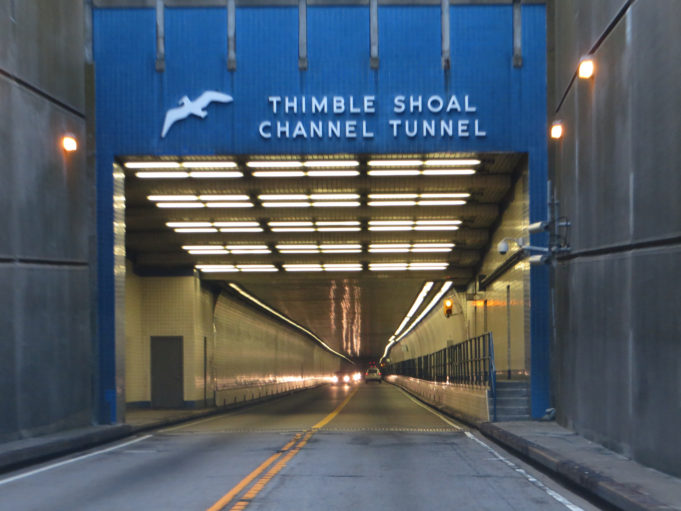 Construction of an additional tube of the Chesapeake Bay Bridge-Tunnel (CBBT) is about get underway this year and has had a multitude of issues that have had to be considered. The $756 million, mile-long transit tunnel has had to withstand environmental impact studies and comes with a new type of tunnel making technology.

Instead of digging trenches, as have been typical in the past, the new CBBT tunnel will be made with a boring machine. The advantages this holds will allow for fewer interruptions to shipping lanes in the channel and a lower risk of damaging other tunnel tubes around the new construction site. Bored tunnels have been the main construction method in Europe and Asia over the past few decades.

The Chesapeake Tunnel Joint Venture got the green light on the project. Boasting completed projects all over the world, the company will use a German-made boring outfit. The boring machine will be over 300 feet long with a boring head 42 feet in diameter, capable of drilling through over 50 feet of sediment per day.

The 10 other tunnels that were built in Virginia’s southeastern region were built “trench style,” meaning during construction the soil, silt, and sediment, known as “muck” from the bottom of the waterway was removed bucket by bucket. In decades past, this meant the muck was approved to be clean enough to be dumped in site approximately 17 miles off the coast of Virginia.

Though, according to The Virginian-Pilot, the 50,000 dump trucks worth of muck to be removed for the current tunnel will not pass environmental tests to approve it for the usual dumping site. This means the muck will have to be disposed in a protected on-shore landfill.

Although the sediment fails the environmental impact studies to be dumped offshore, it did not come with a surprise. Jeff Holland, executive director of the Chesapeake Bay Bridge and Tunnel Commission, said they knew “there was that potential.”

The CBBT boring method requires the use of chemical additives to remove the muck from the machined tunnel. Petroleum-based foams lubricate the boring head to allow the sediments to flow from the hole. However, the sediment is left contaminated, becoming hazardous to aquaculture.

Sampling from the CBBT showed that Total Petroleum Hydrocarbon (TPH) levels tested at 75 milligrams per kilogram of soil, higher than the 50 milligram level that is deemed safe by environmental standards. Therefore, the offshore dumping site and an Eastern Shore basin is off limits to hold the removed sediment.

If dumped in the proposed sites, TPH could seep into groundwater aquifers and contaminate drinking water and possibly destroy waterlife. A special site will approved liners will be used to house the mountains of sediment.

Project executive Andres Gonzalez reportedly said that the ramifications of the boring machine contamination were, “expected from the beginning.” He explained that not much TPH is needed to contaminate sediment and prohibit it from being dumped offshore. In the report, he claimed that the threshold is likened to, “placing a drop of liquid into an Olympic swimming pool.”

Environmental regulations have become much stricter in regards to tunnel boring over the last half-century. When the first tunnel was built in 1952, followed by the CBBT being completed in 1964, Holland stated, “The overall regulatory approval process virtually did not exist.”

To satisfy all federal regulations, environmental studies, and permits, Holland said CBBT officials spent nearly $8 million. They had to analyze the effects of construction noise on migrating whales, work lights on nesting sea turtles, and sediment drift on neighboring mussels.

With the contaminated soil, Joe Rieger, the Elizabeth River Project’s deputy director of restoration, claims the toxic sediment may have already been present. TPH and other toxins were found in sediment when the Midtown Tunnel, which opened in 2016, was constructed. Before regulations existed, industries along the banks routinely dumped waste into the water.

The real surprise, however, was how much muck from the Midtown Tunnel actually did pass regulation, said Rieger. Of the 1.5 million cubic yards extracted, only 10 percent was required to go to an on-shore landfill, leaving 90 percent for ocean disposal.

Nevertheless, to pass environmental standards, he said, “All the efforts we’ve put forth are paying off…We were really glad to see that.”

Chris Moore, a senior scientist with the Chesapeake Bay Foundation, says it’s not unusual to find historical contamination hidden under healthy layers of sediment. Though, he claims there should not be expectations to find any contamination where the new CBBT tube is being constructed. Strong currents surging in and out of the bay flush the mouth of the channel with ocean water.

“There’s tremendous movement through there,” he said. “My guess is that’s true virgin territory.”

Currently, officials are searching for a suitable landfill large enough to store the contaminated sediments, but many are unsure of how long it will take for the TPH to break down naturally or how harmful it is to humans and wildlife.

Mike Unger, an associate professor at the Virginia Institute of Marine Science, said, “you’d need a specific chemical analysis.” Many TPH compounds have barely been studied. Benezene, said to be one of the most dangerous TPH compounds has been linked to certain cancers and central nerous system conditions. Others in TPH, like some mineral oils, are safe enough to put in food.

Officials with CBBT say the process with contaminated sediment removal will not delay the five-year-long project or increase the price. No taxpayer money is being allotted to the project, but will be paid for with tolls, bonds, and loans.

Until the German boring machine arrives in October,  preparations are under way on the man-made islands integral to new CBBT construction. A launch pit is being dug to lower the machine so it can begin boring under the Thimble Shoal channel, installing concrete rings in the tunnel as it goes.

During the year the boring apparatus will take to chew through sediment to the other side, crews of 20-25 people will man a control room inside the machine around the clock.