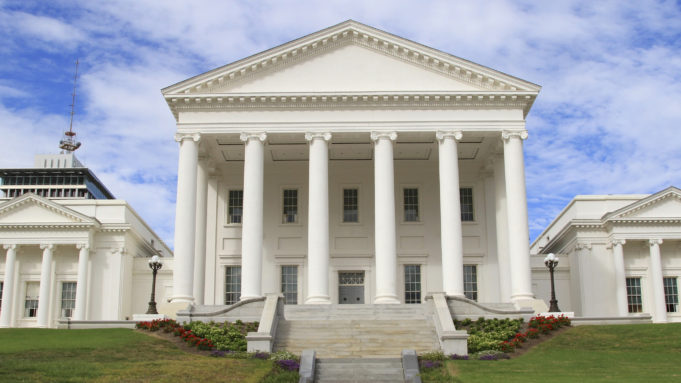 A crowd of a few dozen gathered at the Hippodrome Theater in Richmond‘s Jackson Ward neighborhood in effort to march through the Capitol District to the Virginia General Assembly to demand an end to partisan gerrymandering. The group was led by members of the One Virginia 2021 redistricting reform organization who headed the march down to Bank Street in the Commonwealth’s Capital to provide support for the implementation of an independent adjudicator in political redistricting.

“We have to end gerrymandering now,” said Brian Cannon, executive director of One Virginia 2021. “Gerrymandering robs of our voice, our vote and rigs the elections in favor of the incumbent politicians,” he said in a report from WTVR.

The demonstrators were adamant that an independent group be commissioned to draw the lines of Virginia’s political voting districts. During the 2018 session, nearly 20 bills from both Republican and Democratic lawmakers have been introduced that would affect how political districts are drawn.

“We’re advocating for a constitutional amendment that will add transparency, good clear rules that will protect communities and allow somebody else to draw lines instead of politicians themselves,” said Cannon.

The Virginia Constitution requires that congressional and state legislative districts be compact and contiguous. In the report, political analyst Dr. Bob Holsworth claims that there is a growing number of legislators that are in favor of an independent group being charged to re-draw Virginia’s districts.

“Still many think by in-large they’re going to be better off if they can have some control over the lines. They say it is a political event that redistricting is and you shouldn’t try to take the politics out of it, because it’s always going to sneak back in and they argue that Virginia’s government still works pretty well,” he said.

The rally at the Virginia House comes after a recent legislative measure has been moving through the General Assembly to rectify partisan gerrymandering.

Senate Bill 106, introduced by Senator David Suetterlien (R-Roanoke) incorporates the previous bills SB 718, SB 740, and SB 752, which provided certain criteria necessary to re-draw congressional and legislative districts. In the current bill, the drawing of districts will be considered by, “including equal population, racial and ethnic fairness, respect for existing political boundaries, contiguity, compactness, and communities of interest. The criteria set out would apply to those districts drawn following the 2020 United States Census and thereafter.”

In late February, the House passed the measure by a 90-9 vote. After a reconsideration by the Senate following a House amendment, the Senate voted 21-19 to pass the measure. The bill will now go to the desk of Governor Ralph Northam.