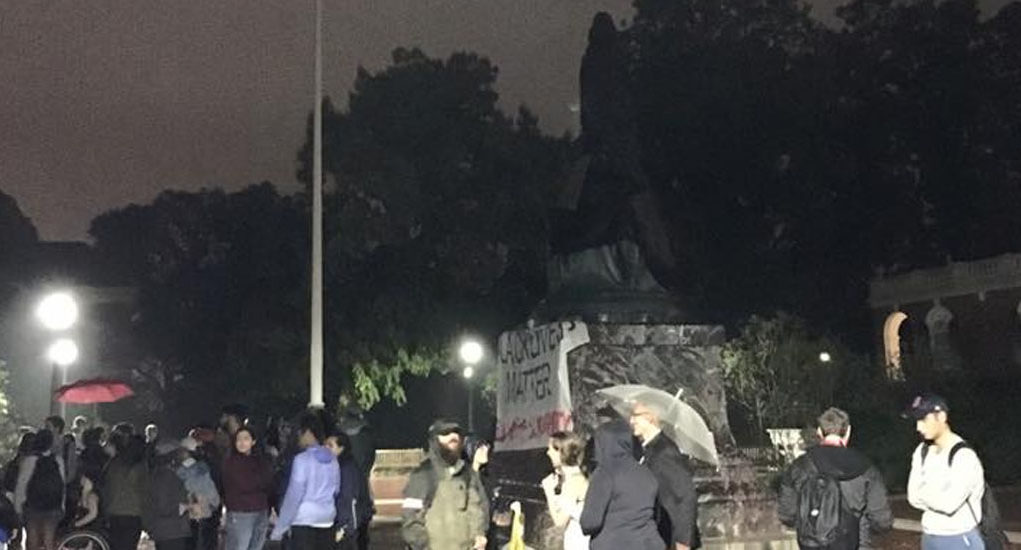 So about that whole equivocation and slippery slope thing where folks said it was only about the Lee and not Jefferson?

The NBC-affiliate in Charlottesville, Virginia, reports that dozens were out at the tarp with Black Lives Matter signs around 8 p.m. Three people were on the statue that is covered in black.

A sign on top of the covering read: “TJ is a racist and rapist.”

The Charlottesville Daily Progress was equally bemused by the collective temper tantrum in front of the Rotunda:

With some sporting “Black Lives Matter” signs and many others chanting, the crowd cheered as three protesters climbed the Jefferson statue, adorning it with signs that dubbed the former president a “racist” and “rapist.”

While chanting mantras that have become routine in anti-racist protests, the common chant “No Trump, No KKK no fascist USA” was tweaked, swapping “fascist USA” with “racist UVa.”

Of course, in the effort to appear reasonable and level-headed, the primary speaker (whom we assume was wearing a mask or refused to be identified) continued to attack those who saw fit to condemn the Alt-Right yet not endorse the whitewashing of history as… well, practically Hitler:

“The same moderates who condemn the hate that came to Charlottesville one month ago fetishize the legacy of Jefferson, and imagine him as our collective moral compass,” the primary speaker said. “We cannot create a hierarchy within white supremacy.

“We can and must condemn the violence of one month ago and simultaneously recognize Jefferson as a rapist, racist, and slave owner,” she continued. “The visibility of physical violence from white supremacists should not take our attention away from condemning and disrupting more ‘respectable’ racists that continue to control the structures that perpetuate institutional racism.”

In short, moderates — that is to say, the general public — are all “respectable racists” complicit in the institutional racism of the American framework.

…and ergo, should be targets for violence.  Which is not an exaggeration if one is a causal reader of Slavoj Zizek, a  Slovenian continental philosopher who studied in Croatia remains the darling of every post-Marxist trying to rescue socialism from failure.

UVA President Teresa Sulllivan issued a statement to the alumni as follows:

I strongly disagree with the protestors’ decision to cover the Jefferson statue. University personnel removed the shroud. One person was arrested for public intoxication. These are the facts of the situation, regardless of what you may read in media accounts of those who have their own agenda.

I would like to frame this issue somewhat differently. Thomas Jefferson was an ardent believer in freedom of expression, and he experienced plenty of abusive treatment from the newspapers of his day. He would likely not be surprised to find that when there are critical disagreements in the polity, those disagreements will find expression at his University. UVA’s importance as a university is underscored by the fact that arguments about free expression, hate speech, and similar issues occur here. Sometimes these arguments are noisy.

Which is a very different tone than the one Sullivan sent privately to the University community itself — students, faculty, and staff:

I strongly disagree with the protestors’ decision to cover the Jefferson statue. I also recognize the rights of those present at the protest to express their emotions and opinions regarding the recent horrific events that occurred on our Grounds and in Charlottesville.  Our community continues to heal, and we must remain respectful of one another if substantive progress can be made on addressing the many challenges and opportunities that we all face.

The University’s founder, Thomas Jefferson, made many contributions to the progress of the early American Republic: he served as the third President of the United States, championed religious freedom, and authored the Declaration of Independence.

In apparent contradiction to his persuasive arguments for liberty and human rights, however, he was also a slave owner. In its early days the University of Virginia was dependent upon the institution of slavery. Enslaved people not only built its buildings, but also served in a wide variety of capacities for UVA’s first fifty years of existence. After gaining freedom, African Americans continued to work for the University, but they were not allowed to enroll as students until the mid-twentieth century.

That precisely the sort of doublespeak that causes most alumni and many students to scratch their heads in wonder.

Instead, citizens removed the shroud while Antifa and predominantly white BLM activists continued to harass them for doing so.

Your full 19 minute video of this exchange is here:

It is abundantly clear from the video that Sullivan’s version of “facts” simply do not bear up to scrutiny.

Such a failure of information and doublespeak only adds up to one very basic conclusion: Sullivan and her handlers see no problem with these events, and the consequences will amount to a stern talking to rather sending a stronger message in the face of what is University-condoned vandalism, conducted by individuals employed by the University of Virginia and the students they teach.

Such are the conditions at the University of Virginia today.

So what is to be done?  First and foremost, the organizers of this event need to be sought out by law enforcement and charged with vandalism.  Those who are members of the University “community of trust” (sic) should be punished accordingly.  Faculty who participated in this display should be fired with prejudice; students who participated should be dismissed without recourse.

Second, once again we have an event where law enforcement is instructed to stand down while a criminal act is being committed.  Whether one chooses to cover a statue in paint or in tarp, both are acts of vandalism that were permitted not only by UVA Police, but are tacitly condoned by the statements of the University’s own president.

Third, it is beyond time for the alumni of UVA to start realizing what is happening on Grounds.  This is not a one-off of bad behavior, but rather a manifested culture of bullying and the absolute crushing of dissent.  Where once ideas and values could be discussed rationally, such ideas that run contrary to the new conformists are squashed with a ruthlessness seen among 1930s brownshirts, not the finer traditions of Mr. Jefferson’s University.

Lastly, the Virginia General Assembly has an absolute moral responsibility to demand more than just answers from the Board of Visitors, but results.  Helen Dragas’ stand against Sullivan is being proven more wisdom than folly every day, and the $2.3 billion slush fund aggregated on the backs of Virginia taxpayers is visibly being used to finance a coterie of faculty who are teaching a sea of students that Mr. Jefferson himself is an anachronism to the very institution he founded.

The University of Virginia enjoys a fine pedigree as one of the best public institutions of learning in the world.  That reputation should not be sullied by a handful who seem bent on weaponizing academia.

Free inquiry and a cultivation of dialogue — not a monologue of dialogue — are the hallmarks of what makes a Virginia graduate.  Above all, concepts of honor still define the experience, and when honor is traded for feelings?  What is left of what makes UVA unique?

UPDATE: Republican Party of Virginia Chairman John Whitbeck echoes the call to have the UVA professors who involved themselves in the event fired and the students expelled:

I’m sure you saw the terrible events that unfolded last night at the University of Virginia. Vandals covered a statue of Thomas Jefferson with black bags and added signs calling our nation’s third President a racist and a rapist. Worse, the University just let the events take place without any push back.The perpetrators of this dreadful act have a public list of demands calling Thomas Jefferson “an emblem of white supremacy” and demanding that the University of Virginia further indoctrinate students with left-wing ideology.

Folks, there is one word that accurately describes these events: madness.

Not a one-off opinion, either.

UPDATE x2:  So exactly how bad is it?  Republican gubernatorial nominee Ed Gillespie had to be pulled away from the campaign trail to raise an eyebrow:

Something tells me this isn’t going to end the way the organizers thought it would.

UPDATE x3:  Lynn Mitchell over at Bearing Drift chimes in:

With nearby Monticello overlooking the UVa campus, I have often wondered what Mr. Jefferson would think of activities such as the August 11 and Tuesday night protests. One of the most interesting read I found was from a Facebook website called Book: Founding Fathers, full of satire and humor. It was an “observation” from the University founder himself, as the author would imagine it to be.

The comments had originally been published in 2015 in response to the suggestion that D.C.’s Jefferson Memorial be closed. I think they equally apply to Tuesday night’s protest at the Rotunda.