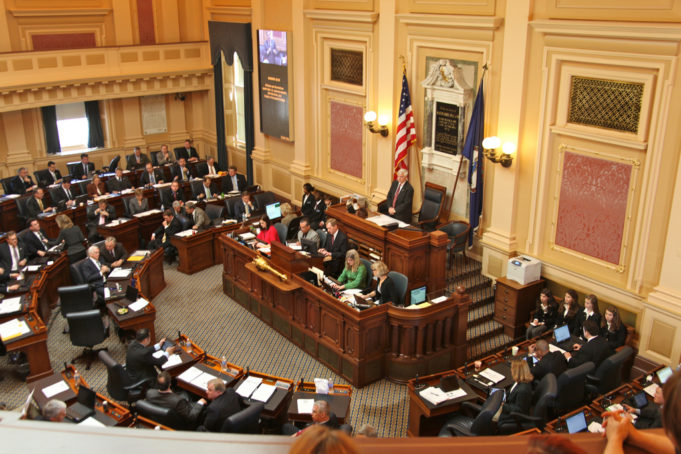 On May 14, members of the Virginia State Senate will return to Bank Street in Richmond to finish, hopefully, the two-year state budget, over one month after spending plans from the lower chamber were forwarded. Senator Ryan McDougle (R-Hanover) called the upper chamber back to deliberate the state budget as they the must consider two yet-to-be-determined bills: one for the fiscal year that ends on June 30 and one for the biennium that starts July 1.

The reason why the Senate will reconvene to work on the state budget is due to their opposing measure on the House of Delegates’ Medicaid expansion program. Before the Senate will consider, they are asking for a full financial report that includes the potential effects of tax reform as the state revenue numbers come in after May 1.

“The schedule we are announcing today will give the Senate the best opportunity to have the most current and complete information on the commonwealth’s fiscal outlook as we craft a final budget agreement,” Senate Majority Leader Tommy Norment (R-James City) said in a statement on Tuesday according to the Richmond Times-Dispatch.

Following the announcement of prolonging the state budget deliberations, Speaker of the House Kirk Cox (R-Colonial Heights) stated, “I’m disappointed it’s taking this long to do something that could have been done nearly a month earlier.”

“We need to get this done sooner rather than later,” Cox said. He explaned, “The Senate needs to put the budget in conference on May 14 so the General Assembly can fulfill its constitutional obligation to pass a balanced budget. Local governments, school boards, and national bond rating agencies are expecting us to act, and there’s no reason for delay.”

On Tuesday, Senator McDougle said the April 17 adoption of the House budget was the same as the adoption voted on March 10, causing the impasse with opposition against Medicaid expansion. He explained that reconvening after the May 1 revenue numbers will will help the General Assembly see how much funding their working with for the two-year budget.

“The House plan is almost the same as the original plan, so we’re at the same starting point.” McDougle explained.

Although the Senate came together on April 18 to consider Governor Northam’s actions on legislation from the original 60-day session, they did not reconvene during the special session to refer the budget bills from the House to the Senate Finance Committee. They were scheduled to meet after adjournment on April 18 to hear the March revenue report provided by Northam’s Finance Secretary Aubrey Layne, but Majority Leader Norment cancelled the meeting after, “senators made clear they preferred to attend a reception at the Executive Mansion,” according to the report.

“It is our intention to consider the implications of all proposals when the Senate Finance Committee meets,” said Norment, pointing to the May 14 meeting. Furthermore, he asked that senators with alternative budget proposals to submit them to the committee, which he co-chairs, by May 7 for evaluation.

Norment has sought a revised revenue forecast before acting on the budget, which Layne is said to update, but Governor Northam and House Appropriations Chairman Chris Jones (R-Suffolk) have opposed that proposal. Senate Finance Co-Chairman Emmett Hanger (R-Augusta) has also made it clear in tandem with Jones and Northam that he will not support a state budget that does not expand health coverage to uninsured Virginians.

“With complete information on the state’s revenue outlook, and with a full understanding of the implications and ramifications of each of the respective Medicaid expansion proposals, the committee will be able to act in the best interests of Virginia,” Norment said.