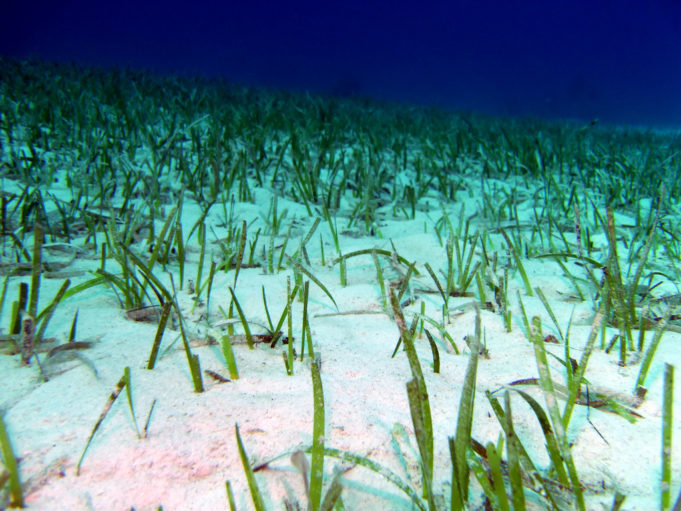 Good news for water-faring creatures; grass in the Chesapeake Bay has surpassed 100,000 acres for the first time in modern history. The aqua-pasture grew for a third straight year, gaining acreage by five percent from 2016 to 2017. Though, why is Chesapeake Bay grass so important?

Grasses are an integral part of the Bay’s ecosystem. An increased acreage of grass means there is more oxygen in the water, creating a flourishing habitat for all the plants and animals making up the food web in the Chesapeake Bay.

Underwater grasses are one of the primary producers of oxygen, as well as sustenance in the ecosystem, in tandem with phytoplankton. The next step in the food chain are the primary consumers consisting of herbivores such as zooplankton, some benthic invertebrates like small shrimp and clams, also larger ones like crabs.

Secondary consumers, the ones which feed on the aforementioned prey, consist of nearly all types of smaller fish like Bay Anchovies, Alewifes and other fairly inconspicuous fish. Moreover, this level of consumerism also includes most small waterfowl like sea-faring ducks, gulls, and other wading birds.

Fish that anglers love to reel in like Cobia, Red Drum, Black Drum, Flounder, Striped Bass, Tautog, Menhaden, and Speckled Trout are sustained by the the smaller animals that are also preyed on by waterfowl. Furthermore, the large, picturesque birds like Osprey and Bald Eagles that sit on the top of the food chain as tertiary consumers owe their livelihood to grasses and other submerged aquatic vegetation (SAV).

The easy-breathing Bay owes much of its proliferation to continued cleanup efforts. According to the Baltimore Sun, Chesapeake Bay cleanup program goals for certain ecological indicators like underwater vegetation is now at 57 percent of its targeted goal.

Nevertheless, sustaining life around the Chesapeake Bay is not the only reason the grasses are important. Underwater vegetation also plays a vital role in helping the Bay withstand future pollution.

As anyone would have learned in elementary school, plants turn carbon dioxide and sunlight into chlorophyll for energy. Thus, it is one of the ways carbon sequestration can be maintained, helping carbon density in the climate and the surrounding ecosystem.

Also, grasses are a buffer against increasing tide strength that can threaten the coastline with further erosion.

In the report, scientists said the vegetative growth is a result of programs to reduce pollution and runoff from farms and urban pavement, typically in the form of fertilizer and sewage as well as the sediment and other pollutants. The area tackled for this was big.

The Chesapeake Bay watershed extends from north of Binghamton, New York, down to Norfolk, Virginia, encompassing all land, rivers, streams, and estuaries east of the Appalachian Mountains.

Officials with the Chesapeake Bay Program explained that the new results show that its work with bay watershed states to limit pollution is working. Federal-state partnership adopted a “blueprint” in 2010 to reverse decades of environmental degradation and restore the bay’s health by 2025.