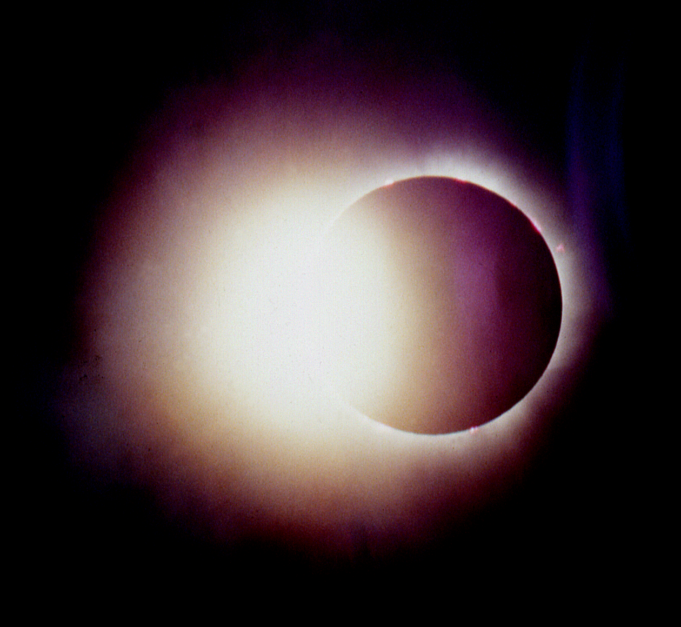 On August 20, 1831, Benjamin Hallowell composed a letter to be published later by the Alexandrian Gazette on his observances of solar phenomena.

Whew, I made the deadline for the 20th! – and right before the eclipse tomorrow! Now, here’s what he said:

Friends Gales & Seaton: In compliance with the suggestion in your paper received to-day, I send you the following views respecting the very unusual, if not unexampled appearance of the sun, observed a few days since.

To understand the phenomena alluded to, it will be necessary to make a few preliminary observation. During the great total eclipse of the sun that had recently taken place, the moon had just passed its perigee, or that point of its orbit nearest the earth, and consequently the combined action of the sun and moon upon the atmosphere produced a great tide in the equatorial regions, and diminished the pressure of the air upon the whole of the surface of the earth. This diminution of pressure upon the surface water would occasion a great increase of evaporation particularly when united with the high temperature that accompanied it. For it is an established fact, that the amount of evaporation from an uninsulated surface of water depends upon the elevation of temperature and diminution of pressure. A vast quantity of vapor thus raised was very observable on the evening of the 12th inst. [this month] at a considerable elevation, in the western part of the heavens, and continued to reflect a very red light for a long time after the sun had set.

The appearance of the heavens on the morning of the 13th I did not observe; but about mid-day, the sun shining through this body of vapor had a silvery appearance similar to that which it wears when shining through a vanishing fog, & I observed it to give an unusually ghastly appearance to the countenances of persons. Between three and four o’clock, the position of the sun, with respect to this body of vapor becoming changed, it assumed a greenish blue appearance, precisely similar to that produced by the following experiments, and which in my opinion was dependent upon the same cause. Let a screen upon which the spectrum produced by the separation of the solar beam into its primitive colors by a glass is thrown, be perforated so as to let all the red ray fall upon a double convex lens, and be converged to focus, the result will be a representation of the sun of a greenish blue color, exactly such as it was observed to have at the time alluded to. The color is that resulting from the combination of all the primitive colors except the red, and is denominated in optics the opposite color.

The same experiment may be performed more familiarly thus: Place a red wafer upon a white wall, and look at it intently with one eye for some time; then let the eye rest, without much effort at seeing, upon the wall, and a spot, the size of the waver, of greenish blue color, will be perceived. The explanation is, that the retina, through the action upon it by the red light from the wafer, becomes insensible to the red ray in that part upon which the image of the wafer rested, and hence the color produced upon that part of the retina, will be the one resulting from the combination of the other six.

The greenish blue color of the sun, then, I think, depended upon the red rays being reflected by the intervening body of vapor, while the other six passed to the eye, and produced the observed appearance. This opinion was strengthened by one or two facts observed at the time. I passed the sun’s ray through a prism, and while the yellow, green, blue, indigo and violet colors appeared with their proportionate brightness, the orange was considerably less distinct, and the red much less than the orange.

Another corroborative fact was, that as the sun descended below the body of vapour, which was about fifteen or twenty minutes before its setting, the vapor reflected an intensely red light – the light that passed thro’ it was therefore separate from the red, and would have produced the opposite, or greenish blue appearance.

The spot that was observed, is by no means an unusual thing upon the sun’s disc. It was visible to the unprotected eye, merely in consequence of the diminished brightness of the sun. By aid of a telescope, a considerable number of spots were visible. In the summer of 1816, a spot was visible to the naked eye for eight or ten days in succession.

If the remarks are any way satisfactory to you, it will be a gratification to

Seven hundred and seventeen words on the phenomena! What makes this article more fascinating to me is its explanation of the theory of visual perception. While certainly things have changed since Hallowell’s letter, most people followed Galen (2nd Century BC), in the emission theory of visual perception, which posited that rays of light were actually emitted (or extramitted) by the eye itself, rather than rays of light being received and interpreted by the eyes.

History is exciting — especially when one delves into the mindsets of peoples of the past, and their concerns about even the smallest matter.

At any rate, I hope someone will be able to write as beautiful a write-up as this on tomorrow’s solar eclipse!