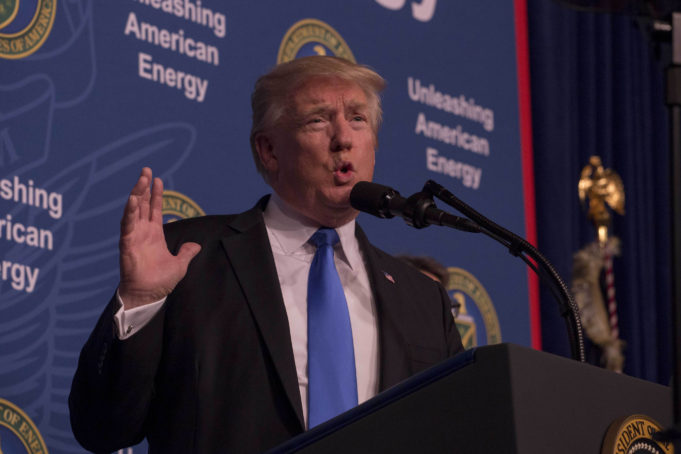 It is “a big week for Infrastructure” according to President Donald Trump.

Trump took to Twitter earlier this week saying, “After so stupidly spending $7 trillion in the Middle East, it is now time to start investing in OUR country!” On Monday, the commander-in-chief rolled out his “$1.5 trillion” infrastructure plan at a crowded White House with state local leaders looking on. Consequently, the full implementation of the program involves close association with state and local governments and the budgetary restraints, therein.

That same day, he met with eight governors and seven mayors at the White House to broaden the spectrum on how the plan is laid out. Out of the elected officials invited, five were Democrats, one of which was Virginia Governor Ralph Northam.

Although Northam referred to President Trump as a “narcissistic maniac” during his 2017 campaign for governor, Trump greeted him with, “I think you’re going to do a great job.” According to the Daily Progress, it seems there were no hard feelings between the two and what was said on the campaign trail was left on campaign trail.

Trump invited Northam to share his thoughts on infrastructure. “I’d like to start by thanking you for what you’re doing with our military,” Northam said. “As you know, we build the finest warships and submarines right there in Newport News. And we have the largest naval base right there in Norfolk,” he added.

Governor Northam also told the president that the commonwealth needs assistance in dredging the Port of Virginia. “We are in position to be the best port, and we want to make sure that we have the depth,” Northam stated. “We need to dredge our channels to 55 feet, widen our channels,” he explained.

In January, the U.S. Army Corps of Engineers released a preliminary approval on a project that is set to dredge the Norfolk Harbor to 55 feet from the 50 it currently measures. As well, the entrance channel to the port is to be widened to 1,300 feet to host Neopanalax container ships into the harbor at full capacity.

Currently, when a ship with an oversized berth enters the Norfolk Harbor, there is a temporary halt of waterway traffic in the channel to all other commercial ships, causing jams and delays with shipments. According to a report from Transport Topics, Virginia Port Authority CEO John Reinhart explained that, “Widening the channel allows for two-way traffic, increases the pace of commerce and makes way for the expeditious movement of Navy vessels in a time of need.”

The Port of Virginia project has both national and international implications, as it is one of the biggest hubs on the Atlantic Seaboard. “The long-term economic benefits of this project include job creation, economic investment and the efficient flow of goods to Virginians, to multiple markets in the Mid-Atlantic and into the nation’s Heartland,” said Reinhart. In his 2018 proposed budget, former Virginia Governor Terry McAuliffe allotted $20 million towards the project that will now be bolstered by Trump’s infrastructure package.

In response to Northam’s charge to the port construction, President Trump replied, “Just put it on the list. Put it high on the list.”

Northam also explained to President Trump that rural broadband is a priority issue in Virginia. The initial ask from Congress by the Trump Administration is for $200 billion. Around $20 billion of that is allotted to be utilized to expand digital networks in rural areas like Southside and Southwest Virginia.

On Monday, the National Telecommunication Cooperative Association (NTCA) issued a press release on the President’s plan to expand digital infrastructure in rural areas. “We greatly appreciate President Trump’s focus on rural America in the infrastructure agenda announced today. Calling for a substantial portion of infrastructure funds to be dedicated to rural projects, including rural broadband, and easing permitting processes that hinder the timely deployment of broadband networks are both essential parts of a comprehensive strategy to address the challenges faced by those seeking to deploy and operate wireline and wireless telecom infrastructure alike in rural America. NTCA is eager to work with the administration and Congress to develop further how such funding can be made available and most effectively utilized,” the release stated.

In a report from Fox News, President Trump remarked to Republican lawmakers at a West Virginia retreat two weeks ago that the projects regarding the infrastructure program need to be authorized swiftly and construction started quickly. He emphasized efforts to, “streamline the horrible approval process — roadways that take 12, 13, 14 years to get approved.” Furthermore, Trump talked about past infrastructure projects in the U.S. “We used to build them in three months, and now it takes years and years of approvals. We’re going to bring that down, ideally, to one year. Two years is our goal, but one year is our real goal,” he explained.

Many state and local officials, even Democrats, are supporters of “public-private partnerships,” known as P3s, and they will be utilized to complete the infrastructure program. However, P3s are not approved in all states. Last year, Governor McAuliffe spoke at the Milken Conference, praising the advantages of P3s used in Virginia. Though, according to the report, he also addressed the urgent need to overhaul the woeful permitting process for clearing infrastructure projects.

The $200 billion in federal infrastructure spending will be allotted over 10 years. The funds will mostly come in the form of  competitive grants designed to encourage outlays by local authorities on transportation systems, highways, and waterways. The Trump Administration plans to use the federal funds as “seed” money, according to The Hill. The hope is that the spending will result in at least $1.5 trillion in spending by state and local governments, as well as being sourced from the private sector.