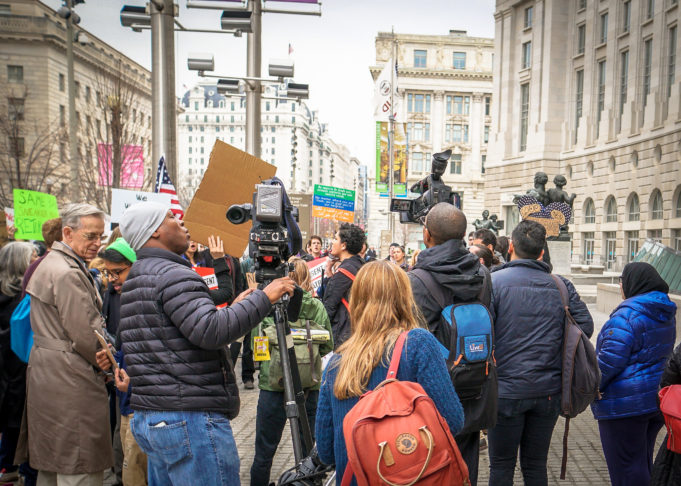 In front of a previously quaint, red-faced restaurant, tucked in between two mountain ranges in a small Virginia town, a man charged through the embattled crowd of protesters to dump a bucket of chicken feces on the sidewalk below the disappointing green awnings of the now-infamous Red Hen. In the aftermath of President Trump’s Press Secretary Sarah Huckabee-Sanders and her family being barraged by political dissidents and kicked out of the shuttered eatery by the owner, Americans are now facing an era of political hostility that may unfold into something even more terrible than many believed could happen, or so was thought.

On Wednesday, a new poll conducted by Rasmussen shows that 31 percent of voters believe it is likely that the U.S. will experience a second civil war sometime within the next five years, with 11 percent saying it’s “very likely.”

Nothing shows the animosity towards one another in America better than the streets in the small college town of Lexington, Virginia after last week’s incident as tensions are running sky-high, according to a report from The Washington Post.

Among the growing crowd of enraged agitators, “Don’t eat at the commie cluck,” read one woman’s hand-lettered poster. Shouts of an emphatic “Trump!” and the boos following it seemed to dominate the air as televisions crew weathered the rain to capture the commotion.

“It’s a shame what’s happened to Lexington,” said Grayson Jennings, a 66-year-old retired contractor and member of the Virginia Flaggers Confederate heritage group. “It’s lost its way. There are too many come-heres and transplants and carpetbaggers,” he said. Jennings echoed what many in the town are saying that “politics shouldn’t decide whether you can eat dinner or not.”

But, that seems to be the guiding factor in today’s discourse as politics is now the defining quality in humanity.

As everyone saw in the run-up to the 2016 presidential election, publicly proclaiming one’s political stance may very well garner opposition, sometimes in the form of physical altercation. When then-candidate Trump traveled the U.S. to campaign for president, he filled sports arenas, warehouses, and airplane hangers; but outside there was always a view of bitterness between angry crowds people from all political backgrounds.

Back to Lexington, later in the day, in a show of rhetorical political profiteering, a Michigan group of two women and a one man showed up with a bullhorn, holding signs with anti-gay messages.

Reportedly rallying against, “Sodomites,” they held up one sign that said, “LGBT — Let God Burn Them.”

Even Jennings and his entourage of Confederate Flaggers thought that was out of line, quickly crossing the street to get away from the sloganeers. “We don’t want anything to do with that crazy religious bigot stuff,” one said.

Unfortunately, scenes like this are now commonplace in America. Gone are the days of civil discourse and respecting opposing views while intelligently disagreeing with them. In the last two years, if anything has been learned in modern politics it is that people are now showing more of their true colors. The truth, in the end, will always come out, regardless of how ugly it is.

So, are these new thoughts, or have people really been repressing them for a long time, say 153 years worth?

There has always been contention between partisan individuals, which in the past was more “we just disagree,” less “you’re trying to kill America.”

The current situation is like an old-fashioned schoolyard fight, born out of years of insults and disparagement between two students, but the fight never happens because the principal steps in to clear the air. The feelings still remain, but lessen from a physical fight to a war of words. However, there is no longer a principal in today’s America.

There is no figure that represents the great equalizer like Dr. King, or Reagan, or any other statesmen or stateswomen.

The chickens have come home to roost, with all puns intended.