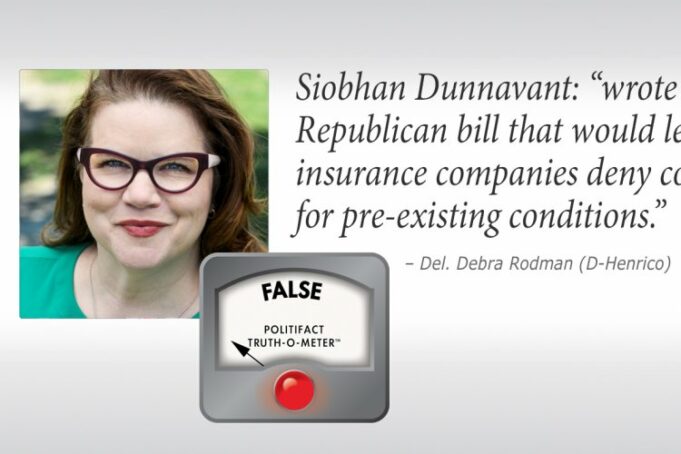 It’s not often that a major Democrat line off attack gets exploded by the media, particularly a month out from an election.

But that’s exactly what happened to Virginia Democrats’ claim that Republicans voted to deny coverage to patients with pre-existing conditions.

Democrats all over Virginia have been citing the short term insurance plan votes as proof that Republicans voted to “deny coverage” to people with pre-existing conditions like diabetes.

Republicans have been working to expand access to short-term health care plans for years. Under Obamacare, the low-cost plans that don’t cover much outside of an emergency aren’t required to contain the full suite of benefits other insurance now must provide.

Stunned by skyrocketing costs, a significant number of people looked to these plans as an alternative — especially after Obamacare gutted so called “catastrophic” plans for young, healthy people.

Legislators voted two years in a row to expand the length of these plans from 90 days to just under 3 years. People would be allowed to buy the insurance they want, with the full disclosure the they are not full Obamacare plans.

Democrats seized on the votes, arguing that by supporting the expansion of these plans, Republicans had in effect voted to deny coverage to those with pre-existing conditions. The short-term plans don’t require that coverage.

Democrats incumbents Schuyler VanValkenburg and Elizabeth Guzman, as well as challengers like Larry Barnett have all used the attack in their advertising in recent weeks.

But PolitiFact took that claim apart in short order. The plans were already on the market in Virginia… and the Federal government had already mandated the three-year limit.

“Rodman’s claim also lacks perspective: It suggests that any Virginian could be denied coverage for pre-existing conditions when, in fact, the regulation will affect few. About 79 percent of Virginians are insured by ACA-complaint plans – subsidized by their employers or the government with mandated coverage for pre-existing conditions, accoording SCC data.”

“The remaining 21% percent is the pool most likely to consider short-term term insurance. Are those who opt in being ‘denied’ pre-existing coverage, as Rodman contends, or making a free choice? We’ll leave that call to you.”

The next time you hear a Democrat talking about denying coverage for pre-existing conditions, you’ll know the truth — that the Democrats are lying to you.