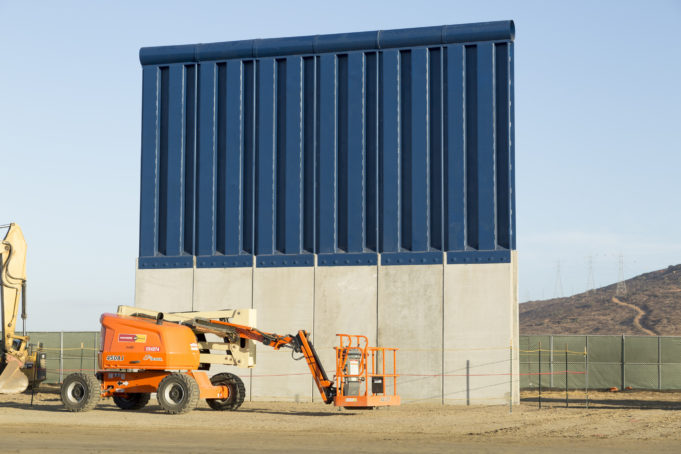 With federal funding running out at midnight on Friday, December 21, a government shutdown has been threatened by President Donald Trump to act as a bargaining chip in one of the last measures that he may get passed with an outgoing GOP majority in the House of Representatives – the final approval and construction of the U.S.-Mexico border wall. During a raucous meeting with Senate Minority Leader Chuck Schumer (D-NY) and House Minority Leader Nancy Pelosi (CA-12), President Trump reiterated his $5 billion request for funding national security interests.

Although Trump has commented that he may even have the U.S. military build the southern border wall, the White House is now backing down from its aggressive tactics after the President said last week that he would be “proud” to close parts of the government over border security.

White House Press Secretary Sarah Huckabee Sanders said Tuesday morning in a report from CNBC that the Trump Administration has “other ways that we can get to that $5 billion that we’ll work with Congress.”

Led by Schumer, Senate Democrats have proposed $1.6 billion in border security funding, claiming that it would be earmarked for building new or repairing existing fences, rather than the wall Trump has proposed. Sanders said during a press conference that the White House may side with the deal as long as it can “couple that with other funding resources” to get to the $5 billion needed for security measures.

Nonetheless, the potential lapse in funding that will come in just over three days already has the nickname “Trump shutdown” after Pelosi, the presumed speaker of the house come January, and the President engaged in a heated exchange in the Oval Office last week alongside the Senate minority leader and Vice President Mike Pence.

Only about 25 percent of the federal government would shut down this weekend, having limited effects. Regardless, the departments of Homeland Security, Transportation, Commerce, Interior, Agriculture, Housing and Urban Development, and Justice will go unfunded in the penultimate month before Democrats take back the majority in the House.

Though, when it comes to funding, while $5 billion sounds like a lot, it is basically a drop in the bucket that could be taken out of other budgets, if necessary. For example, how about out of the foreign aid budget to neighboring Mexico?

During recent budget negotiations, the U.S. pledged $5.8 billion in aid and investment for strengthening government and economic development in Central America, and another $4.8 billion in development aid for southern Mexico, AP reported. The U.S aid aims to promote better security conditions and job opportunities as part of a regional plan to allow Central Americans and Mexicans to remain in their countries and not have to emigrate north.

The State Department’s “public and private investment…in the Northern Triangle [Honduras, Guatemala, and El Salvador]” does not require congressional approval, unlike the border wall. Moreover, there is word that the U.S. will also contribute to agricultural, forestry, and tourism projects in southern Mexico, reportedly in return for Mexico allowing Latin American migrants seeking asylum in the U.S. to remain in Mexico while their applications are processed.