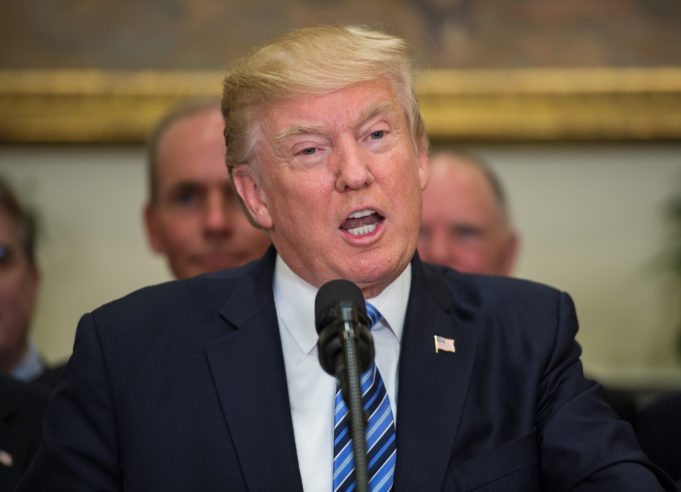 President Donald Trump slammed proponents of DACA, the controversial immigration policy, enacted under the Obama Administration saying that it is “broken” and “unfair” in a Wednesday morning tweet. This comes after Judge William Alsup of the Ninth District U.S. Circuit Court in San Francisco, California, temporarily blocked the president’s efforts to rescind the Deferred Action for Childhood Arrivals (DACA) program.

The executive order from the Obama Administration protects nearly 700,000 “Dreamers” ,aptly named by the Development, Relief, and Education for Alien Minors (DREAM) Act, from deportation. President Trump has claimed that federal judges and lower courts have been unfavorable to both him and the agenda of his administration to reform U.S. immigration policy, one of his biggest campaign promises. 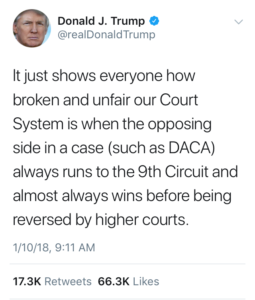 “It just shows everyone how broken and unfair our Court System is when the opposing side in a case (such as DACA) always runs to the 9th Circuit and almost always wins before being reversed by higher courts,” Trump tweeted.

The tweet came just hours after a pre-dawn operation led by U.S. Immigration and Customs Enforcement (ICE) agents targeting dozens of 7-Eleven stores nationwide. The operation, which was largest targeting an employer since President Trump took office, was initiated to interview store employees and deliver immigration audit notifications. According to a report by the Washington Post, ICE agents made 21 arrests of unauthorized workers at some of the 98 stores that were raided.

According to Fox News, senior judicial analyst Judge Andrew Napolitano said the president should not be upset with the 9th Circuit ruling. He explained that the temporary stop could eventually assist him in the administration’s goal of comprehensive immigration reform. The temporary ruling on DACA means the current policy will remain in place until Congress proposes an immigration bill or the litigation is played out at the federal level. Since DACA will not expire in March as originally stated, it gives President Trump and the Republican-led Congress a few months to strike a deal on immigration reform. In the process, President Trump could grant protections for DREAMers wanted by congressional Democrats in exchange for one of his biggest campaign promises – a “big and beautiful” border wall with Mexico.

Along with DACA, President Trump seeks to end chain migration and the lottery system in the current immigration law. Today, as reported by The Hill, House Minority Whip Steny Hoyer (D-MD) pushed back against the notion that Democrats are close to endorsing a package that would couple legal benefits for DREAMers with a short list of hard-line enforcement measures being pushed forward in Congress by Republicans. Hoyer was among a bipartisan group of more than 20 lawmakers from both houses of Congress who appeared at the White House on Tuesday in an attempt to move both chambers closer to a final deal to protect immigrants under DACA.