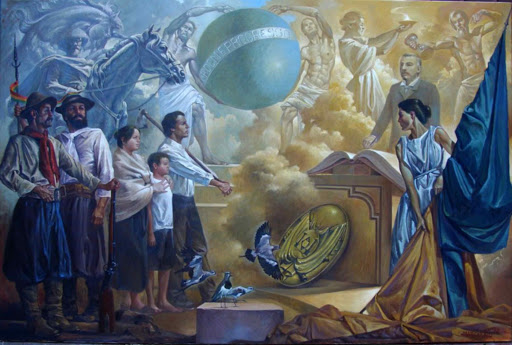 Along with the Utilitarianism of Jeremy Bentham, a political philosophy of sociological positivism arose, as opposed to the traditional government responsibility of sociological protectionism. This influence from the French would greatly impact the trajectory of American society, and continue the deviation from the ideas of natural law entrenched in 18th-century constitutional theory.

The idea that man could manipulate or improve the machine of civilization can be traced back to the influence of the physical theories of Isaac Newton, principally among them the law of gravitation. Early Utopianists, like Charles Fourier, extrapolated Newton and Leibniz’s laws of physics into laws of metaphysics, that there was “unite du système de movement pour le monde materiel et spirituel.”[1] But while Newton had demonstrated the physical world to be ordered perfectly by a perfect governor,[2] Fourier saw the imperfections of society and the immoralities of the soul.

But rather than accepting that man was in a fallen state from perfection, he believed man was in a progressive state toward perfection. The ultimate societal (or metaphysical) state, would through the similar Newtonian laws of attraction (i.e., gravitation) progress toward “Universal Harmony.”

To Fourier, this “universal philanthropy” was “unknown to our philosophers; instead of this passion they have conceived only of its subversive or counter-development, the mania for subordinating everything to individual interests.”[3] Universal philanthropy, on the other hand, would subordinate everything to collective interests — each individual playing his part in the world, just as each star selflessly plays its part in the universe.

The doctrine of Unityism would eventually play out in social legislation in England and the United States, but it required an active agent to organize society toward total communion. Just as God was for Newton the active agent in organizing and preserving the material world, so would the government be that active — or positive — agent in the societal world. Based on the sociological laws of gravitation [the attractive forces of society], a monarch could, theoretically, organize his kingdom so as to bring peacefully “the whole world under his empire.” If one could rule absolutely and correctly,

“the people would hasten to carry all their savings to the tax-gatherer; the young men would view with each other in their ardor to enlist in his service…In addition, such a Monarch would impart to all other sovereigns, far or near, an Attraction for recognising his supremacy; they would hasten to anticipate each other in sending Ambassadors to give in their adherence to him, and proclaim him Arch-Monarch of the Globe.”[4]

But this compulsory recognition of ultimate earthly authority would not be based on “coercion, punishment, or war,”[5] but rather on liberty — the natural liberty to gravitate toward a centralized power. The passions of mankind would not be suppressed, but celebrated. Said one socialist in 1839 writing about Fourier, “All the passions of man should have their appropriate place in the social system; none are really bad; none can be dispensed with; they only need to be placed in proper relation to other parts of the system, just as every celestial body enters into and forms part of the solar system.”[6]

Such a collective could not begin from the top. By definition, the aristoi were few and the demos were many. No, a union — a consolidation of political and societal “mass” — must begin at the bottom. They were, after all more proximate to each other than they were to the wealthy; and they were more plentiful. Furthermore, their oppression from the wealthy, was a naturally unifying factor. Just as a nail is powerless to resist the hammer until it is flush with its target, so the individual may be violently driven into submission by its oppressor, but only until its collective surroundings give it the unifying force to cause the oppressor to recoil and cease its violent percussions.[7]

Coupled with Fourier was another French philosopher, Auguste Comte, the founder of Positivism — i.e., that epistemological knowledge could only be gained through empirical evidence ascertained by sensory perception. Comte believed that man’s belief in theological explanations is an infantile state of human society; that his reliance on metaphysics or the abstract is an adolescent phase; and that the total reliance on sensory perception, being tested by means of the scientific method, was the ultimate maturity of a society.[8]

Like Fourier, Comte believed society could be understood in the same way as the physical universe. “Now that the human mind has grasped celestial and terrestrial physics…there remains one science, to fill up the series of sciences of observation,–Social physics.”[9] 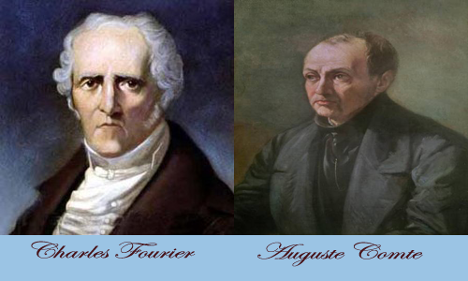 But the positivist school, like Kant, believed anything beyond the physical realm was ultimately unknowable. Only that which was experienced and sensed could be known, and the only things that could be ascertained were the analytic and the synthetic.

The infantile idea of “God” could not be gained through natural perception, and was therefore unknowable. The same could be said for the adolescent abstracts, like “Reason” or “natural rights” or “popular sovereignty.”

However, because the theological and the metaphysical had been eliminated as unifying aspects in the supernatural realm of localized phenomena in the natural realm, there was for Comte’s society no transcendent quality to which his citizens could commonly aspire.

Comte’s epistemology posed another problem for society: Because knowledge was only gained empirically through individual experience, there was no collection of knowledge. In other words, individuals’ knowledge and experiences were simple integers — meaningless without a unifying authority to calculate them and give them purpose.

With the supernatural removed, not only would Comte’s men live, as Hobbes would say, “without a common power to keep them all in awe,” but their individual experiences were meaningless without a system of organizing that knowledge. Ultimately, one man could not rely upon another man’s version of an experience as factual. But he could entrust to a central collection agency his own experiences, and by virtue of communal interest, accept that agency’s dissemination of knowledge as authoritarian.

Positivism has had a direct impact on the United States, especially in academia and public education. Yet we wonder why — when there is no metaphysical concept of unifying truth, and that despite the insistence on “objective” scientific observation — our nation has devolved morally into nothing more than relativism, our justice is determined increasingly by nothing more than pluralism, and the underlying theme of our legislation is to “do something,” even if it won’t work.  And when our own traditions and legacies are dismissed as infantile, we can no longer look to history for good examples of law, justice, and ethics — for we in our hubris assume that we are necessarily better than they.

It is no surprise that Comte advocated for the enlargement of the state as an authoritative and distributive agency. It is also no surprise that, in the absence of acknowledging God, Comte would create for himself what he called, “The Religion of Humanity,” complete with temples, rituals, catechisms, and saints[10], which was designed “to nourish and strengthen the feeble altruism of human nature by exalting Humanity as the object of a ceremonial worship.”[11]

But there is a fatal flaw in Comte’s “Three Stages” theory, in which he arrogantly thought we had through the elevation of Humanity matured beyond the infantile and juvenile stages of a progressive sociological existence. The flaw, which we have still failed to recognize, is this: Children have adult role models—benchmarks by which their maturity and humanity may be compared. Social progress has no such benchmark, no such role model. Comte can’t be sure if his social ideal is an all-wise sage, or if it is in reality simply a rebellious teenager who thinks it knows better than its previous generations. Comte can’t be sure that our “progress” will suddenly be struck with reality – that our theological and metaphysical forebears really knew what they were talking about.

[2] Isaac Newton, Principia Mathematica, “Elegantissima haecca solis, planetarum et cometarum compages non nisi consilio et dominio entis intelligentis et potentis oriri potuit… Hic omnia regit non ut anima mundi, sed ut universorum dominus…,” i.e., “This most elegant system of the sun, the planets, and comets may only have come from the counsel and dominion of a intelligent and powerful being…This being reigns over everything — not as a spirit of the world — but as the master of the universe.”

[6] In The New Moral World: or Gaxette od the Universal Community Society of Rational Religionists, no. 43 (August, 1839)