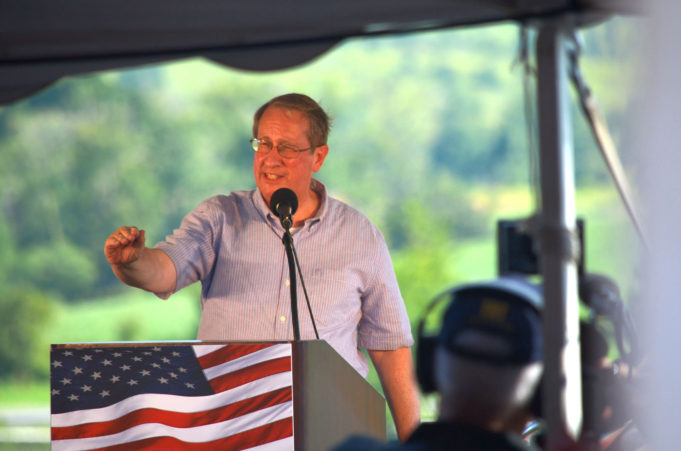 Yet another Republican lawmaker has been subject to violent threats and gun violence. On Friday, a fanatic Botetourt County, Virginia, man was taken into custody after threatening the life of Congressman Bob Goodlatte (VA-6) on Twitter. Though, this story is just one of the many examples showing the hypocrisy and blatant deception among anti-gun advocates.

Michael McGowan, 38, has been held on a federal charge for transmitting a threat, according to The Roanoke Times. Charges and a subsequent arrest warrant were filed after a member of Goodlatte’s staff spotted numerous angry, violence-laden tweets directed at the congressman.

In mid-December, McGowan started tweeting at Goodlatte. One message said:

“Dear, any law enforcement agency. I am a veteran Army officer and am fully qualified and capable to kill. Should Trump fire Mueller illegally and @BobGoodlatte6 fail to impeach him I will consider Bob an enemy combatant and arrest him. If he resist I will kill him.”

In recent days and weeks, McGowan’s Twitter activity inferences mass shootings and the targeting of lawmakers, including Goodlatte.

“Despite my past hyperbole I am not a threat to you & don’t believe in violence. The Army already made me experience enough 4 a lifetime. But it wouldn’t surprise me if congressmen= next targeted by mass shooters. It seems the escalating norm.”

“Perhaps, you will start to create anti gun laws for your own protection. The more these mass shootings escalate the more I think cynical and corrupt politicians should be worried. *if* I were a mass shooter (and I am not) You would be at the top of my list.”

According to the report, court documents entailed that, “McGowan stated that he had become intoxicated and sent the tweets hoping to get someone’s attention over his concerns about the current status of our country.” After being taken into custody for Boutetourt County sheriff’s deputies, it was found that he did not own firearms.

Insofar as the crazed man is concerned about killing Goodlatte inarguably with some type of firearm, he seems to be an avid fan of a 6th District Democrat who is campaigning with anti-gun, anti-NRA fervor.

On March 29, McGowan retweeted Jennifer Lewis, one of the Democrats vying for the nomination to challenge Goodlatte for his congressional seat.

“…and reinstating the assault weapons ban. So, @vademocrats, keep your eyes on the 6th, and I wish Jennifer the best of luck with her campaign!”

It is quite unfortunate, ironic really, that people who vehemently oppose Second Amendment rights and those who advocate for the protecting of them, turn to violence involving guns to dissuade lawmakers from doing their job and representing their constituency.

Interestingly, that the man who threatened a Republican congressman has yet to have his Twitter account blocked. Actually, that is quite par-for-the-course in this day in age.

It seems that all Twitter engineers can do is block supporters of the president, but when actual crimes are committed, when they are carried out against a political conservative at least, they are let off the hook. Of course, it doesn’t fit the narrative they are trying to articulate. Nevertheless, the hypocrisy of the far-left always shines like a beacon of truth through the false narrative of progressivism.