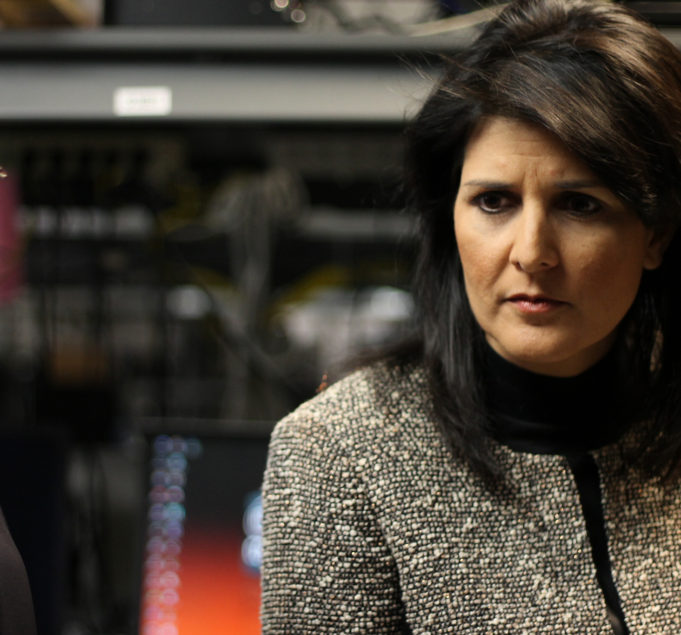 On Sunday, UN Ambassador Nikki Haley said on CBS’s “Face the Nation” that the Treasury Department will announce new sanctions against Russia on Monday. Haley, who has been in vehement opposition to the advancement of Russia in the West, said the sanctions are set to, “go directly to any sort of [Russian] companies that were dealing with equipment related to Assad and chemical weapons use.” Though, President Donald Trump has announced that he is holding off on the sanctions.

The sanctions would have punished Russian companies that were instrumental in the manufacturing of equipment and weapons used by Syrian President Bashar al-Assad‘s government in its alleged chemical weapons attack last week. On Friday night, President Trump responded to the attack, alongside Britain and France with a barrage of tomahawk missiles on the Syrian capital of Damascus.

According to Axios, Trump’s decision to go against the statement made by Haley shows that the White House, “is officially approaching Haley’s announcement as a ‘misstatement,’ but notes that one official said ‘there had been confusion internally about what the plan was.'”

Trump’s movement does make some wary that he is not just softening his stance on Russia, but beginning to act in a way that many eluded to earlier.

Weeks ago, following the poisoning of a former Russian spy and his daughter on British soil, a conglomeration of nations set to forward a coordinated move on Moscow by expelling diplomats from Russian consulates. The White House explained they would be expelling 60 Russian diplomats and suspected spies and closing the consulate in Seattle, due to its proximity to a U.S. naval base.

However, it seemed President Trump did not want to take the lead on the offensive. According to The Washington Post, he was less than happy to do so.

“We’ll match their numbers,” Trump reportedly said, according to a senior administration official. “We’re not taking the lead. We’re matching.”

After the public announcement of the expulsions, Trump erupted, according to administration officials, after it was found that France and Germany were only expelling four Russian diplomats each. Trump seemed to believe that other nations would show an equal sign of force by expelling the numbers the U.S. would, leaving him “furious” that the White House was being portrayed in the media as taking by far the toughest stance on Russia.