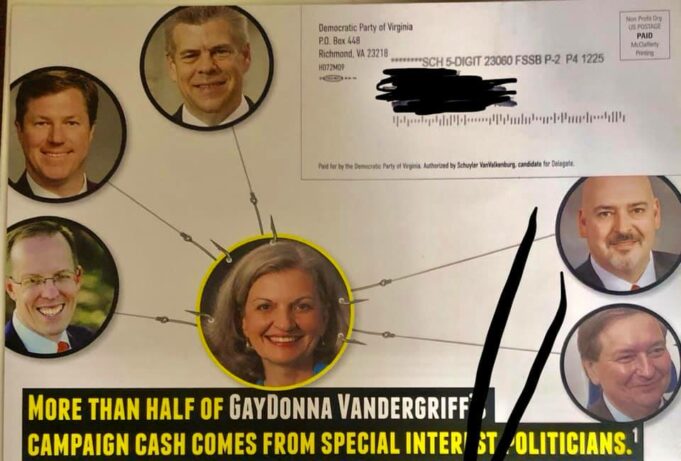 This doesn’t fit the narrative at all.

The problem? The mailer shows Vandergriff “hooked” to a number of male Republican members of the House, not unlike a marionette — the clear implications being that Vandergriff is under the control of powerful Republican men.

Vandergriff didn’t take the slight lying down. She posted a scathing reply on her Facebook page not long after the mailer started appearing at homes, pointing out the fact that she earned an MBA on her own — and that VanValkenburg’s attack smacks of ’50s style misogyny.

“I am a strong, professional woman who earned an MBA while raising a family – no man gave it to me – and I earned my spot on this ballot fair and square. What kind of signal does this send to young women? It is never okay to depict women like this.

“Schuyler VanValkenburg needs to apologize to every woman, especially the young girls he teaches in the classroom, for this sexist depiction of a woman as a puppet of men. I’m my own woman.”

Democrats pounced to defend the mailer.

Kathryn Gilley, a communications staffer for the House Democrat caucus, challenged Republicans’ upset about the mailer as disingenuous.

“If y’all all of a sudden want to seem pro-woman, show me the receipts,” she tweeted. “Otherwise it’s more empty talking points from a majority male caucus and staff – but that’s just a woman’s perspective.”

“The mailer implies she’s funded by top House Republican leadership – not our fault they’re all men,” she added.

The mailer is even more remarkable considering VanValkenburg’s recent vote on HB 2042, a bill that would have created a mandatory minimum sentence of 60 days for repeat domestic violence offenders.

Though the initial bill had bipartisan support, Democrat Governor Ralph Northam attempted to amend the bill, removing the mandatory sentence.

VanValkenburg and a number of other Democrats voted to accept the Governor’s action, which would have effectively neutered the bill.

The House as a whole rejected the Governor’s amendment. Northam vetoed the bill a month later.