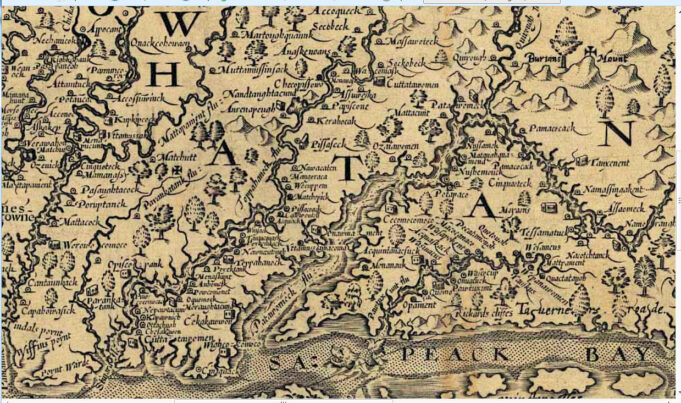 When all know the tale of the first Thanksgiving at Plymouth Rock, but how many of us (including lifelong Virginians) know the story behind the first recorded Christmas in Virginia?

Fortunately, we can peek 400 years into the past and see how the blessings of the holiday season bring people from all walks of life together and the best in us.

Thanks to Captain John Smith’s narrative, we have a fleeting glimpse of the colonists’ second Christmas in the New World.  On December 29, 1608, Smith (then president of the colony) and a dozen gentlemen and soldiers set sail from Jamestown in the Discovery, catching the outbound tide.  Close behind was another small boat that carried 25 men.  The blustery winter wind tugged at the vessels’ sails, propelling them downstream toward the mouth of the James.  Smith and his companions were bound for the York River village of the native emperor Powhatan, who ruled the Indians of Virginia’s coastal plain.  Powhatan knew that the Jamestown settlers were famished and offered to exchange a shipload of corn for some weapons, trinkets, a hen and a rooster, and an English-style house.  Smith willingly accepted the offer, for the colonists were in desperate need of food.  However, he was prepared to take it by force, if necessary.

Some twenty miles below Jamestown, Captain Smith and his companions paused overnight at the village of the Warraskoyack Indians.  They availed themselves of the natives’ hospitality and then set out at dawn, despite gathering storm clouds.  Soon, frigid gusts hurled sleet and snow into their faces and glazed their sailing vessels with ice.  They turned toward shore to wait out the storm and came to land near the mouth of the James.

Smith and his group sought refuge with the Kecoughtan Indians, whose village lay upon a large open plain near Old Point Comfort. The natives welcomed their unexpected guests with special gifts in their hour of need: food, shelter, and the warmth of human kindness.  The Englishmen spent Christmas at Kecoughtan, partaking freely of the Indians’ generosity.  Smith later wrote that “the extreme wind, raine, frost and snow caused us to keep Christmas among the Salvages.” He added that “wee were never more merrie nor fedd on more plentie of good oysters, fish, flesh [meat], wild foule and good bread.”  He also said that he and his companions had “never had better fires in England then [sic] in the drie warm smoaky houses of Kecoughtan.”  Thus united by the bond of human kinship, the first English colonists and Virginia’s natives shared their Creator’s bounty.